In this half of the year, we have witnessed a lot of launch events of flagships from Samsung, Sony, Google, Huawei, LG and so on. But are they all as powerful as each other? We would say… let’s check the following battle first and come to a conclusion! Today we have: 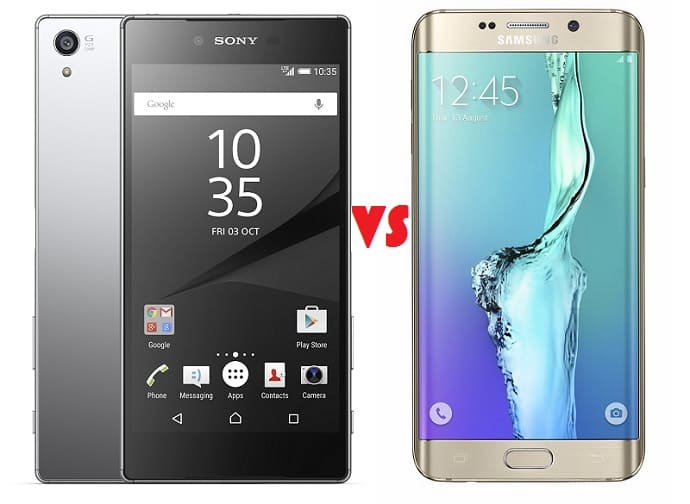 As we know Z5 Premium is famous for its 4K display and S6 edge Plus is known as a flagship smartphone with a curved screen. They have something special for themselves but which one is more outstanding in terms of design, specs and prices? First, look at the spec table and we will clearly see some important differences:

Z5 Premium and S6 edge Plus are phablets but the Plus is obviously bigger with 5.7-inch display instead of 5.5-inch one of the Premium. Despite being smaller, the Sony’s beast has an up to 4K resolution for the display. Many people has argued if it is really necessary for a smartphone since its size is not of a TV and we can hardly notice any difference. On the other hand, the Plus’s Quad HD screen seems more reasonable. And it sports 4GB RAM, biggest capacity for RAM nowadays, while the Z5 Premium has ended up with boasting just 3GB RAM, which cannot show the strength a flagship should have.

As for the processor, it is also like a comparison between Snapdragon and Exynos chip, yet both phones are almost similar in terms of speed. However, there is one thing about the Snapdragon 810 most people are afraid of. It is the heating issue the chipset causes. Many devices equipped with SD810 have been reported to have the same problem. Then, Sony Z5 Premium has to be wary.

Nonetheless, we have to praise Z5 Premium for its expandable internal storage and camera; they are better than those of S6 edge Plus for sure. In spite of giving consumer only one 32GB version, the Premium ROM comes along with a microSD card slot that can be used to expand the ROM up to 200GB. And the rear camera is…AWESOME with 23 megapixels to take any photo you like. In addition, the battery of Sony Z5 Premium is a bit larger than that of Samsung Galaxy S6 edge Plus.

So, those are some points we want to compare when it comes to the specs. Now, we move on to the design.

Sony Xperia Z5 Premium does have a premium look, just like its name. The frame is made of aluminum with nylon padding on the corners to protect the glossy glass on the back. The fingerprint sensor is built in the power button on one side of the handset, which is very creative and useful as you do not have to turn the Z5 Premium up and down to unlock it.

Meanwhile, Samsung S6 edge+ design includes a metal frame; the front and back surfaces are covered with Gorilla Glass 4. Like we said above, its selling point is the dual curved edges and one of them can even be customized to display 5 apps you usually use, 5 contacts, a night clock, notifications and alerts. Different from the Sony’s product, its fingerprint scanner is integrated into a physical home button placed on the front.

Well, in this look comparison, it is so hard for us to choose a winner. They are all gorgeous! We let you decide it.

We mainly considered the specs, prices, and designs of these flagship smartphones and saw that each of them is special in their own way. They are powerful and beautiful. Yet, we have to admit Samsung Galaxy S6 edge Plus is better than its competitor today in many aspects. Don’t you agree?