Sharp has just launched a phone called RoboHon. Perhaps it is because it looks like a robot and… 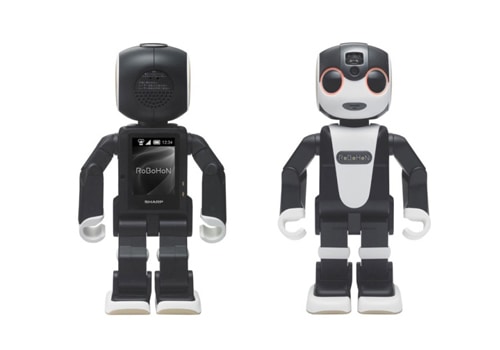 Sharp introduced three new smartphones coming along with EDGEST design and super slim bezels a few days ago. Spec-wise, they feature a Snapdragon 808 hexa-core chip and Adreno 418 GPU. But, Sharp did not stop there! They has just released their RoboHon with a very strange design. Actually, it does not simply look like a smartphone but a robot. The design was done by professor Tomotaka Takahashi.

In general, Robohon is said to be the closest device to an actual “android”, working as a smartphone and digital assistant. Yet, of course, you can use it to do many basic things like making calls and sending emails.

As for the Sharp Robohon Specs, it owns a 2-inch QVGA (320×240) screen, a Qualcomm Snapdragon 400 SoC chip, 3G LTE support and Wi-Fi antennas. Besides, due to being a robot phone, it cannot be as thin as other smartphones. Instead, it measures 19.5 cm in height and 390 grams in weight.

Though Sharp has not revealed the OS yet, the machine seems to run on Android OS since its home and back UI buttons look similar to those on an Android phone, and the notification bar reminds us of Google’s mobile OS. So, let’s wait and see!

This is really an interesting product made by this Japanese producer, not only to kids but also to many adults in fact. However, we wonder how we can put it in our pocket 😀 ! That is quite a problem, isn’t it?

For the Sharp RoboHon price and availability, it is planned to be sold at the beginning of 2016 in Japan first. Though, we have no idea if the phone will go on sale in other countries or not. Personally, we hope it will come to Malaysia soon 😉 !