Rumor has it that Samsung is pushing the dual camera to the mid range segment. A look at the Samsung Galaxy C8 Specs suggests that the rumors are accurate. 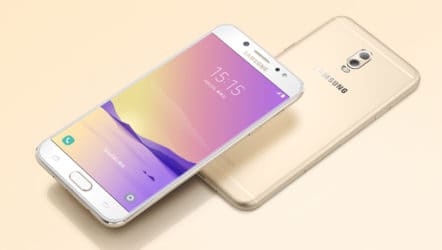 The Galaxy C line has performed very well with the aluminum frame before. Therefore, it is making a comeback to the Galaxy C8. The dual camera is placed lower than the back surface to eliminate the need for hump protection. It makes a perfect combination with the neat look of the aluminum metal. Over, the device looks a little bit luxurious for mid range. But that should be a good thing anyway.

On to the Samsung Galaxy C8 specs sheet, It looks just as promising as the design. There is an octa-cores CPU powering the Galaxy C8. No mention of the chipset brand but we believe that it’s an Exynos chipset. Memory comes in two options, 3GB RAM with 32GB storage or 4GB RAM and 64GB storage. Covering that hardware is a 5.5-inch, AMOLED screen. For now, the operating system of the device remains a mystery. However, we are certain that it is the Android Nougat with an Oreo update coming in mid-2018. 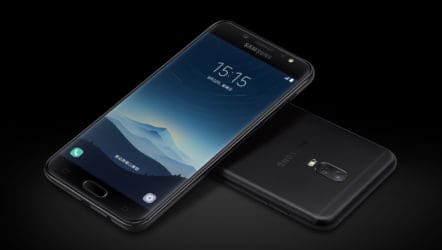 The real deal of this phone is the camera. It sports dual 13MP sensors with a massive f/1.6 aperture. The selfie shooter comes with 16MP resolution and also a huge f/1.7 aperture. Not just the hardware is top notch, but the highly-praised camera mode from the Note 8 is also here on this phone. Now you have another option from the Galaxy J7 plus to access the live focus feature.

For the moment, there is no detail about the launch date of the Galaxy C8. However, we believe that it will come no later than October. We will update as soon as more information is available.