Nokia concepts that are being expected to go real after Nokia come back in 2016 are no longer strange to many of us smartphone lovers. However, among many Nokia concepts that aspiring designers have produced, only several of them become our favorite, for a bunch of reasons. Among the most popular devices are Nokia Swan and Nokia C1. 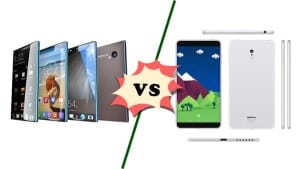 Nokia C1 is famous for being the first Android smartphone Nokia ever made, if it really comes true after the Nokia come back set to happen in 2016. Although it is not official for now, there is very high chance for this Nokia C1 smartphone to be launched soon, since we already spotted real life image of this beast.

Meanwhile, Nokia Swan is still a pure concept made by a Vietnamese artist. We have no idea if Nokia got to know about this design already. If yes, we very much hope that they may be inspired and bring the Nokia Swan to real life.

Nokia C1 has a very realistic design, since it was made be produced and launched soon. The smartphone has slim bezel, and elegant body and round border. Because it has been a long while since the last Nokia smartphone was remember, this Nokia C1 could be the handset that re-create Nokia’s signature in the mobile market.

On the other hand, Nokia Swan looks much more fancy, for it is meant to be a product of creativity. The handset looks like it is full metal, with rounded shape and strong rear. Both of them look very appealing, but each serve as a different target.

3. Nokia Swan VS Nokia C1: what to be recognized

Nokia Swan is definitely offering very appealing features. It is a smartphone + tablet hybrid that works super smooth as a smartphone, but could be turned into a tablet in just seconds. Besides, the designer did not mentioned much about Nokia Swans specs, rather than popular 4GB RAM and 216GB ROM.

Nokia C1 has been having some rumors in terms of specs and release date. Everyone was automatically paying attention to the C1 since it is said to be the first Nokia-made Android smartphone ever. This piece of information itself is good enough to help Nokia sell the phone. Furthermore, the Nokia C1 price is said to be of middle range to reach the majority of customer: possibly sub RM1,300.

As I mentioned more than once above, since these devices have their different target, they were developed very directly into their orientation. However, it is nice to have a full review of 2 of the most popular Nokia concepts to date: one is pure product of creativity, the other is meant to be manufactured and used.