Smartphones Nokia have finally received confirmation from the company for a grand comeback at the end of 2016. In anticipation of the event, let’s take a look at the best Nokia-branded phones ever leaked, with ascending RAM capacities. Nokia E1 is among the first yet remains the most frequently talked-about smartphones Nokia renders. The reason for this is simple: Nokia E1 impresses anyone from outside in. The phone comes with an elegant and classy appearance with a slim, all metal body. In terms of Nokia E1 specs, reports have been suggesting a 5.0 to 5.5 inch display, 2GB RAM, and a 20MP camera Pureview. Although there is no hint about the battery yet, we believe the E1 will come with a decent cell, as Nokia as always been famous for their long-lasting battery life.

Nokia E1 is predicted to be ranked in the budget price category. Surprising as it may sound, Nokia E1 smartphone will only cost a humble price tag of around USD 200 to USD 250 ( which is about PHP 9,5K to 12K and Rs 13,6K to 17K). This price is barely higher than Asus Zenfone 3 Max or Lenovo Phab Plus, 2 among the most popular lower-end smartphones in our market nowadays. Nokia P1, according to latest reports, will be the first Nokia smartphone to be produced this year. It even made a debut on a press render not long ago. And through the press render, we got to know that the device will be made and developed by engineers at InFocus/Sharp. Therefore, Nokia P1 will have both very similar design and features to its sibling Sharp Aquos P1, also a product of the same manufacturing company.  In details, Nokia P1 specs include: a 5.3 inch FHD display, 3GB RAM with 32GB built-in storage (expandable). Plus, the mobile will pack 22.6MP camera on the back, a 3,000 mAH battery as well as IP58 dust-proof and water resistant technology. 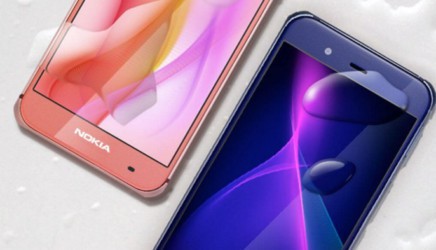 Nokia C1 is a direct competitor to Nokia P1, for packing the same RAM capacity of 3GB. Just like its counterpart, Nokia C1 also showed up with a realistic render design very recently. At first glance, Nokia C1 design looks like a classic Android smartphone with all metal frame in combination with high-quality 2.5D glass screen. Considering Nokia C1 specs, reports suggested a 5.5 inch display, 3GB RAM and 64GB of internal storage, which doubles its counterpart. Last but not least, Nokia C1 will come with 13MP/5MP camera combination for photography.  Nokia C1 price has not been confirmed yet, but is expected to be slightly higher than 250USD, and no more than 300 USD. Nokia really planned to target the budget market the moment they get back. Nokia 1100 Pureview is a smartphone version of the feature phone launched many years ago – Nokia 1100. Nokia 1100 Pureview specs come with competitive features: 4GB of RAM, a Quad HD display, a powerful processor by MediaTek (specific model yet to be confirmed). The whole machine will be powered by at least 3,500 mAH to 4,000 mAh battery. Design-wise, Nokia 1100 Pureview appears with a distinct back cover, super slim rears, and no physical home button on the front. There is no confirmation about the phone’s display size and camera sensors yet. However, targeted as a higher-end category with 4GB RAM, we can totally expect to see a main camera of at least 20MP Pureview. Nokia Lumia is a 2-in-1 device: smartphone and game console. The machine can work like any other smartphone, and turned into a part of a game console, with XBOX technology under the hood. This is described as an ideal mobile handset for gamers: smooth performance and stunning graphics display. Nokia Lumia Play specs are reported to pack either 4GB or 6GB of RAM, an octa-core processor, 64 GB of internal storage that can be expandable up to 128 GB. There is yet to be information about this Lumia Play’s display size, but the screen will come with a high resolution of 1136 x 640, protected by Gorilla Glass. The whole machine is powered by a massive 6,000 mAH cell. In addition, Lumia Play is said to packs 20MP Pureview/8MP camera duo, support NFC, Bluetooth 4.0, and Wi-Fi, and come with 5 different color options. Above are some of the top smartphones Nokia we got to know till now, arranged in a ascending RAM order. From 2GB RAM budget handset to 6GB RAM premium devices, Nokia comeback promises great excitement for those who love to see them again in the smartphone market.