In the near future, 4K display is predicted to become more common than now. We have already had many devices that can shoot 4K videos, so the displays on the phones should be improved to be able to replicate those videos perfectly. As a result, today, we would like introduce some of the pioneers in the 4K display smartphone trend to you! 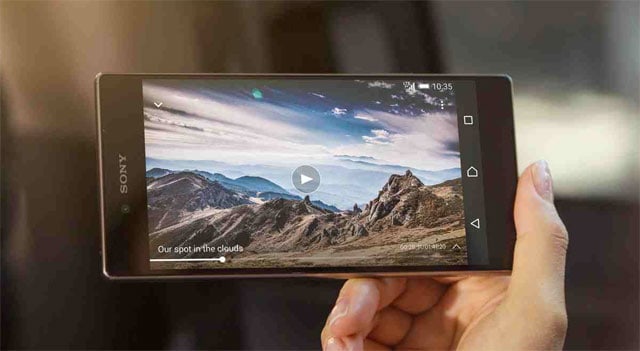 This is a member of the Sony Xperia Z5 series in this half of 2015. Specially, Z5 Premium is equipped with a very high display resolution, making it the world’s first 4K handset. No doubt that the Japanese technology giant has created a super strong competitor.

Spec-wise, Sony Xperia Z5 Premium uses a 5.5-inch 4K IPS LCD screen with 806 PPI, a Qualcomm Snapdragon 810 chip, 3GB RAM paired with 32GB of expandable storage, a fingerprint sensor built in the home button and Android 5.1 Lollipop OS. Also, it comes with a 3,430mAh battery and a combo of a normal 5MP front plus a wonderful 23MP rear camera (which supports recording 4K videos with 12,800 ISO, autofocus speed of 0.03s and 5X zoom without reducing much the pic’s quality).

Besides Sony, recently we have spotted 2 leaked images on the internet which are said to be the pictures of Vivo XPlay 5S, successor to Vivo XPlay 3S. Some expected Vivo XPlay 5S specs have also been revealed such as a Snapdragon 820 chip, a premium 4K display, a fingerprint sensor, a whooping 21MP main and an appealing 12MP secondary shooter which is absolutely perfect for those who love taking selfies. Although there was no word made for the Vivo Xplay 5S’s RAM capacity, we anticipate it would go with 6GB RAM. So, Sony Xperia Z5 Premium should be more careful when competing with this Chinese smartphone.

Just a few months ago, some reports mentioned that there would be a ZTE product called ZTE Star 3. It would come with a 5.5-inch 2,160 x 3,840 pixels screen, giving the display a pixel density of 808 PPI. Also note that the bezel was listed at a mere 0.55mm, nearly edge-to-edge. However, after that, we have not heard anything related to ZTE Star 3 specs, price as well as launch date. So, we assume they are still working on it. Let’s wait and see!

According to some sources, Sharp is about to join the 4K smartphone battle with a device boasting a 5.5-inch IGZO touchscreen with a massive 3,840 x 2,160 pixel resolution. Although the official information has not been made by Sharp yet, we are excited about the leaked detail of the machine’s display. It will probably have 806 PPI and include low energy consumption, sharp images, and borderless designs.

In conclusion, we hope that there would be more handsets to appear in this list next year. But before the time comes, what do you think about the above smartphones? Share with us your opinions!