Samsung Galaxy J7 is going to be the next member of the company’s J series to get launched this year. It seems like Samsung will try their best to promote many J products in 2016… 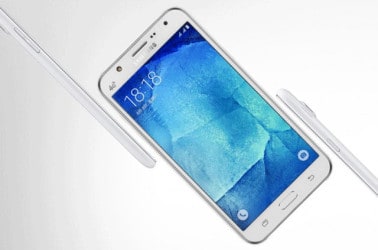 Samsung Galaxy J7 2016 showed up on GFXBench with specific features

Last year, we saw many Samsung Galaxy J handsets go on sale and receive much positive feedback from consumers. It can be understood easily as they belong to mid-range smartphone category, coming with affordable prices and good-enough performances. Perhaps, that is why Samsung has decided to continue producing new J machines as well as remake what has been introduced in 2015. And Samsung Galaxy J7 is one of them.

After Samsung Galaxy J1 officially debuted in Dubai and Samsung Galaxy J5 specs appeared on GFXBench not long ago, we guess it is the Samsung Galaxy J7’s turn to show what it’s got. Lately, like the J5, J7 showed up on GFXBench benchmark listing with some key specifications, including a 5.5-inch Full HD screen, a Snapdragon 615 chip paired with Adreno 405 GPU, and 3GB of RAM plus 16GB of internal storage (expandable up to 128GB, according to other sources).

The whole device will be powered by Android 5.1.1 Lollipop OS and maybe a 3,000mAh battery (though, it’s not been confirmed yet). As for camera, the main one is capable of 13 megapixels and the front-facing snapper is 5 megapixels. Well, there are still some Samsung Galaxy J7 specs untold for now, but hopefully more will come in the next days.