Unlike our previous prediction, Nokia will strike directly at all segments, from budget to high-end smartphone line instead of slowly approaching the market with a low-end smartphones first. This is proved by the latest Nokia phone on GeekBench – Nokia Z2 Plus. Let’s take a look! Nokia P just leaked a few days ago and immediately attracted a lot of attention of the mobile world but most of Nokia P information are still very mysterious. Meanwhile, another high-end Nokia smartphone has appeared on GeekBench with both high single-core and multi-core points. That Nokia phone is labelled Nokia Z2 Plus. A long with the specs leaked is Nokia Z2 Plus design image. The phone has narrow bezel and 4 uniquely concave front corners. The phone seems to have soft-touch polycarbonate body as that of HTC Desire 10 Pro, which brings a pleasing level of grip and comfort.

According to Geekbench, the smartphone scored 2156 points for single-core performance and multi-core got 5217 points, which is relatively equivalent to Samsung Galaxy S7 (2108 single-core points and 6395 multi-core points).  The phone will probably mount a 5.0-inch Quad HD display. In terms of Nokia Z2 Plus specs, the phone is powered by an quad-core Snapdragon 820 or 821 SoC, clocked at 1.8 GHz, and 4GB of RAM. Geekbench also reveals that Z2 PLUS installs Android 6.0 Marshmallow out of the box. 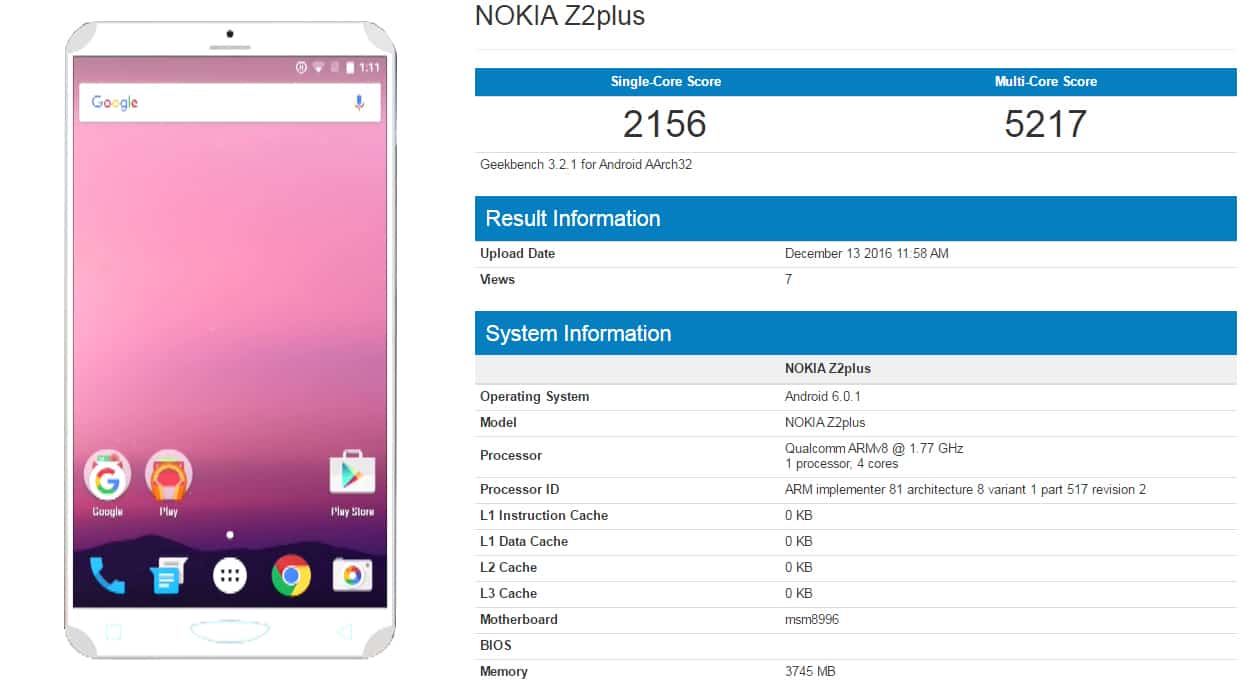 As for the photography, Nokia Z2 Plus comes with 21MP rear camera with OIS technology and an 8MP camera selfie shooter. According to unveiled images, there will be a fingerprint sensor embedded into the Home button. What we want to highlight is the swipe area under the rear camera. It will help user unlock the phone, swipe to see photos or swipe when reading news and message.

Nokia Z2 Plus: price and availability

Nokia Z2 Plus is the latest Nokia high-end smartphone that probably appears at MWC2017, after Nokia D1C, Nokia C1 and Nokia P. We are still waiting for the official announcement from Nokia to which smartphone will be launched first. There is no further information so Nokia Z2 Plus price is still a mystery. Stay tuned to get more information about this Nokia flagship.