OnePlus X Unboxing: Great specs and stunning design at only $250

First announced in October last year, OnePlus X – the newest device from Chinese smartphone brand, has just been officially released. So now we have a OnePlus X unbox. Let’s take a look! 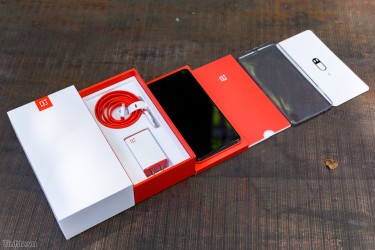 After Oneplus X unboxing, there are many things that draw my attention. First up is the design of the box. It was beautifully made (as in the photo above). The layers are carefully arranged just like what you can see from a high-end smartphone. The charging cable is a tangle-free one. There are no earphones attached inside the box, but Oneplus X goes with a plastic case. It doesn’t have a great design but you know, it’s free!  The charger comes at 5V/2A, which allows users to fully charge the phone in a short time. Other props from Oneplus X unboxing include an instruction note and a SIM eject tool. Everything in the box, except the phone, was designed in two colors: white and orange. The cable is my favorite. Besides, OnePlus X has been already covered with a screen protector.

As for OnePlus X design, this phone is among the prettiest we’ve ever seen this year. OnePlus X comes with a metal frame whose corners are slightly curved to make it more comfortable in your hand or in your pocket. Sandwiching the phone are two pieces of glass, which are both Corning Gorilla Glass 3s. The model in our hands is the onyx black. There is also a ceramic model but that is a limited edition that costs much more money. Another highlight in OnePlus X is that there is a notification switcher on the side of the phone. This feature is rarely offered in an Android device, but iPhone users would find it familiar. There are 3 modes available: all noti, chosen noti and no noti for you to switch between.

Let’s talk about OnePlus X specs! This OnePlus phone comes with an AMOLED, 5″ 1080p, 441 ppi screen display. Under the hood, there are a 2.3 GHz quad-core processor sitting on Adreno 330 GPU and a Snapdragon 801 chipset. The phone is also powered by 3GB of RAM and 16GB of ROM (expandable). OnePlus X battery, however, is not really remarkable. It comes at only 2500mAh. About OnePlus X camera, there are a 13MP on the back and a 8MP on the front.

Our first impression of the phone is that it performs REALLY smoothly with absolutely no lag. The startup takes much shorter time than most Android phones. All functions react immediately, just like I’m using a Google Nexus. When I updated the current apps, the phone got a little bit warmer. That also happens when the phone is under multi-tasking, but it doesn’t bother me at all. In normal use, the phone feels really cool and comfortable. OnePlus X camera is fine, compared to other mid-range smartphones. With such performance, OnePlus X price comes at only $250 and is currently available at retailer stores.