Nokia Lumia 1620 is a beautiful, interesting smartphone you should check out right now! Specially, it has a wonderful camera and… 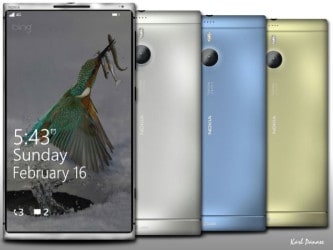 Nokia Lumia 1620 specs and design are of a true flagship…

Design-wise, Nokia Lumia 1620 concept smartphone was created by Karl Panase. According to the designer, Nokia Lumia 1620 will measure 8.3 mm in terms of thickness and weigh 140 grams. Those are such perfect numbers for a beauty. It is easy to notice that this is a big phablet with a super slim bezels and no physical home button on the front surface. The back cover seems to be made of metal with a simple camera and Nokia logo placed in the middle of the phone’s upper part.

Spec-wise, Nokia Lumia 1620 also incorporates high-end specs configuration. Specifically, the handset will be likely to sport a 5.5-inch Super AMOLED screen with 2K (aka Quad HD) resolution. It will be powered by a 2.2GHz quad-core Snapdragon 805 chip, 3GB of RAM, 64GB ROM (expandable up to 64GB), and Windows 10 Mobile OS. Besides, a 3,300mAh battery plus wireless charging capability will be in charge of fueling the whole machine.

As for the camera, the main one is said to be capable of 20 megapixels with OIS, a dual LED flash and an ability of recording 4K videos, and the selfie shooter is also expected to be 8 megapixels. Some other Nokia Lumia 1620 specs include Dolby Digital Plus sound technology, a dual SIM and 4G LTE connectivity.

This is a premium, high-end smartphone, but to compete with Chinese devices also boasting many good features and affordable prices, we guess Nokia Lumia 1620 has to be priced at around $250 or $270. If so, it will be a great deal for those who love smartphones in general and Nokia products in particular. Do you agree?