Sony has been rolling out a global security update. It started out earlier on the Xperia XZ and XZ premium. Now the Sony Xperia X series gets the update. 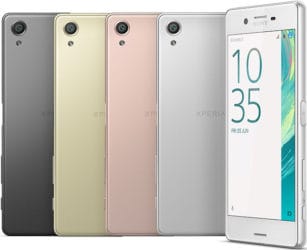 The standard Sony Xperia specs feature 5 inches of full HD screen made of scratch-resistant glass with oleophobic coating. Under the display is a Qualcomm Snapdragon chipset model 650 running an Hexa-cores CPU. The Sony Xperia X RAM sports 3GB with two memory options: 32 or 64GB. However, if that is not enough, there is a MicroSD slot to increase the storage up to 256GB. The device’s battery can provide 2620 mAh which translates into 67 hours on standby. But still, It should get you through a day on normal occasion.

The other phone of the series is the Xperia X Compact. The name compact doesn’t mean this phone got worse specs since the only thing that got reduced is the screen size which measures 4.6 inches. The Xperia X Compact battery even got its capacity boosted to 2700 mAh. While the rest of the spec remains the same (SnapDragon 650 chipset and 3GB RAM), there is only the 32GB storage option. However, the MicroSD slot is still there so that shouldn’t be much of an issue.

The mobile photographers are going to like the Sony Xperia X camera. The reason is that it got a 23MP sensor for the primary camera while the selfie camera has 16MP. The same goes for the Compact variant. Another interesting feature of the Xperia X series is that they feature a fingerprint scanner but on the side of the phone. It’s directly where you would rest your index finger when holding with the left hand.

This is the September security update for Sony devices. However, since it came out just after the Android Oreo official release, it’s more like a preparation for the next big update. So we will keep our fingers crossed and look for an official announcement.