Recently, a Twitter user @onleaks has revealed some pictures Google Nexus, showing some detailed interesting features. Want to know what they are, keep reading ;). 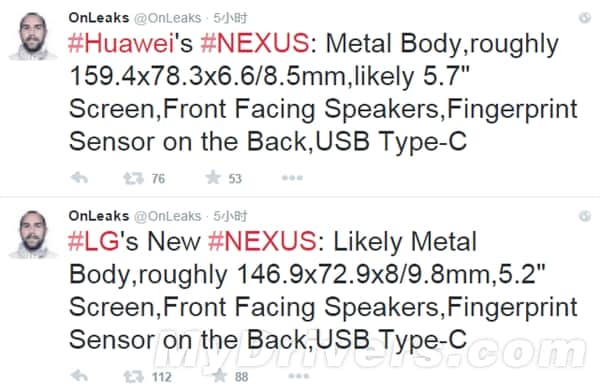 From the leak, we notice that both Google Nexuses will come with metal material, yet there is a different point in the design. While Huawei decides to provide their machine with an all-alloy body, LG just takes a metal frame for theirs.

So, if we combine these new details with what we have got so far, the picture of Google Nexus is quite completed. According to previous rumors , Huawei Nexus will sport 2K screen, a Snapdragon 810 processor, 4GB RAM, a Sony IMX230 21MP back camera, and support Rezence/WiPower wireless charging support.

Of course, no matter who produces Nexus, it is still a Google’s brand and definitely will inherite all the best and latest and advanced technologies from Google. That will be where Huawei and LG meet each other! They both will be able to apply Android M to their handsets.

In conclusion, after the one of the most famous flagships of the season Samsung Galaxy Note 5 has been launched, Google Nexus (2015) is the next one we are looking forward to. Hope that more information will be released in the near future. Now, look the gallery of Nexus leaked photos and tell us what you think 🙂 !