Many of you were pleasantly surprised when Asus announced the Zenfone 2 on the CES. You get high end Specs on this 5.5″ device. In this review we will compare the Asus Zenfone 2 vs Galaxy Note 4. Both of these handsets are with 5.5″ inch in the case of the Asus Zenfone 2 and 5.7″ inch at the Galaxy Note 4 quite large. With high end specs on both phones we think it warrants a review of what you get for 200-250 USD versus three times the price on the Samsung Galaxy Note 4. 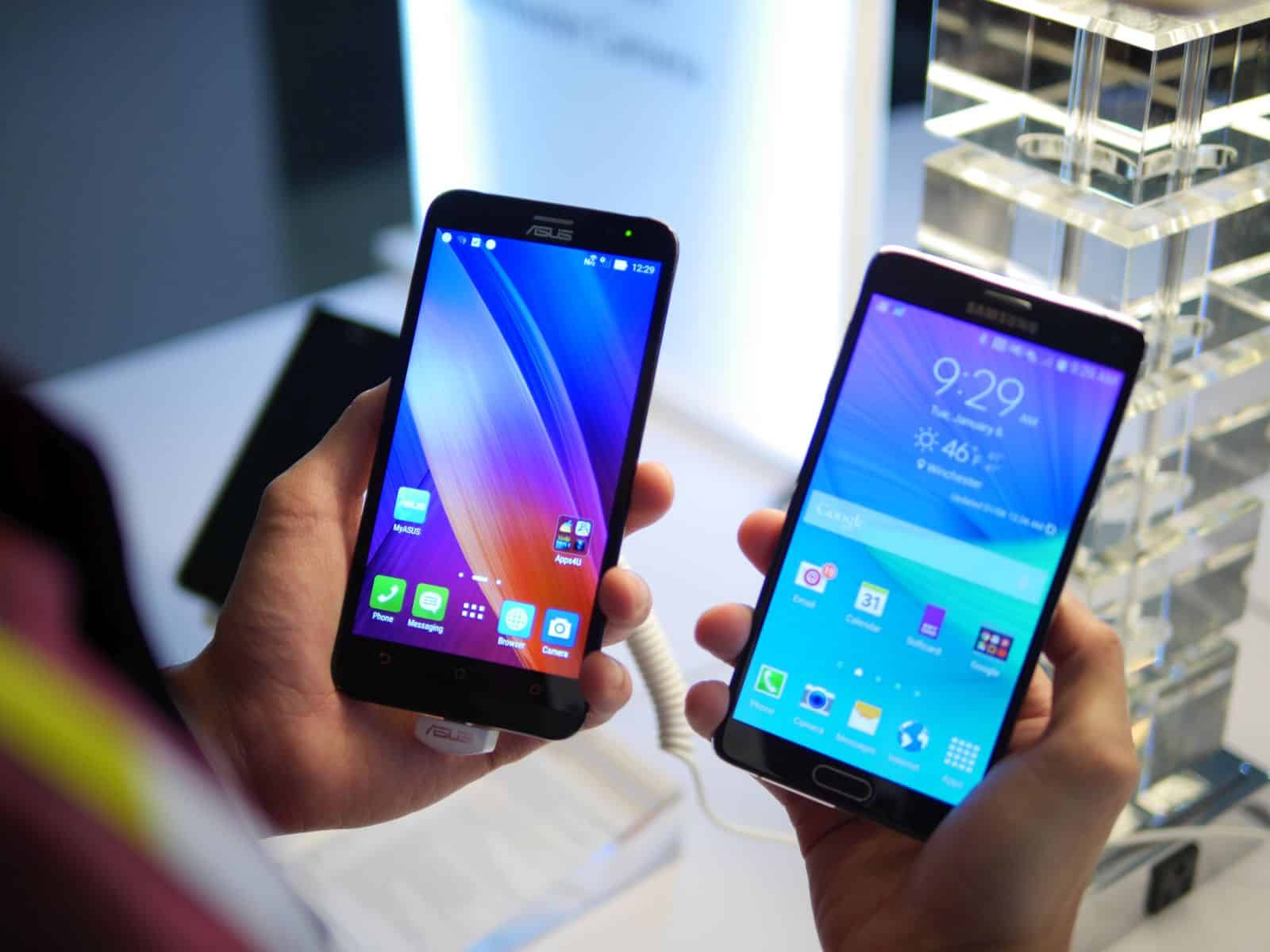 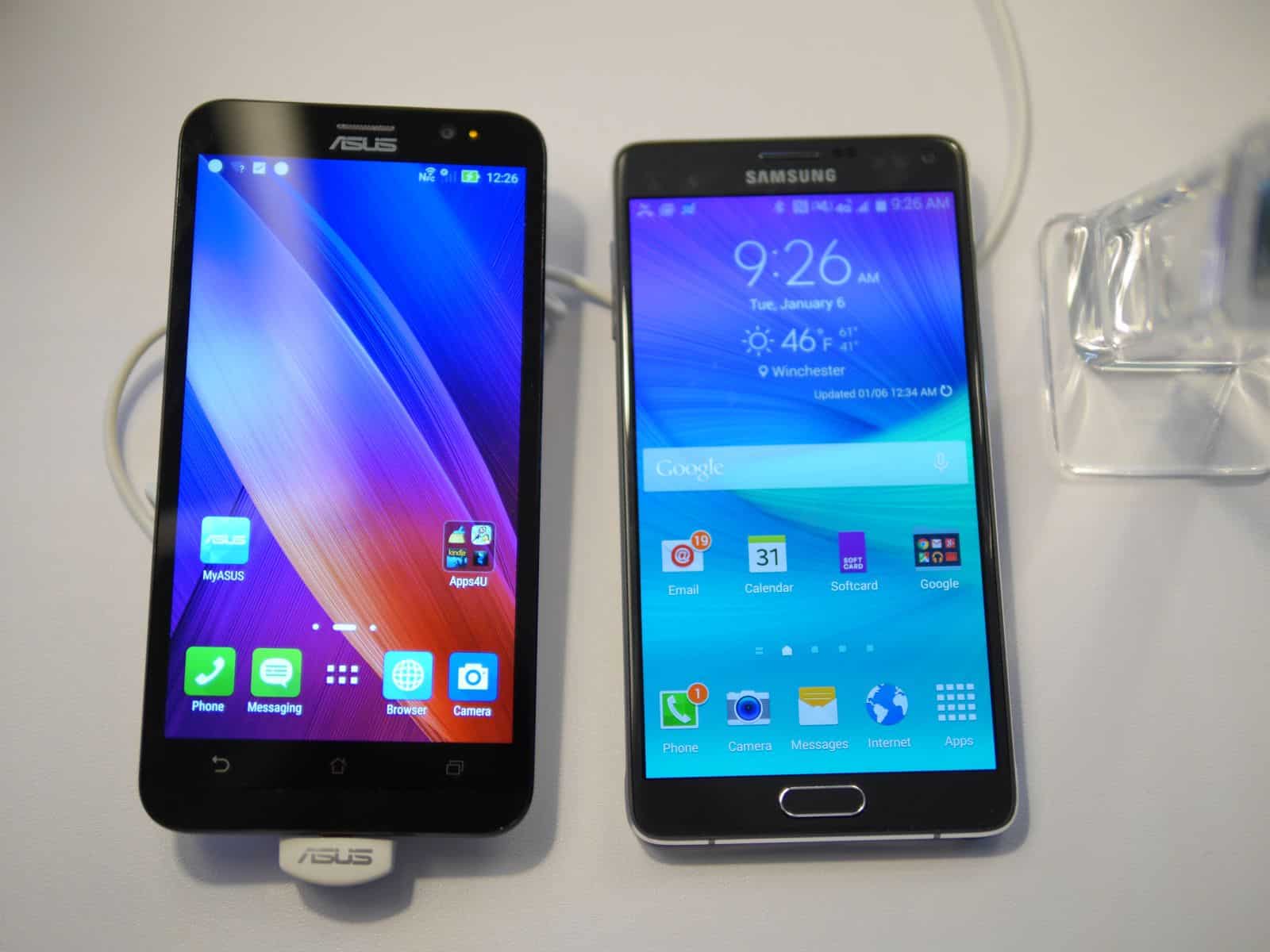 From a pure visual standpoint I could not decide which i like more. Both are rather large to carry in one hand and are not as compact as the LG G3 for example.You can say that both phones are definitely more understated and traditional design, compared to an iPhone 6 or HTC ONE, which is totally okey. If you like the Faux Leather of the Note 4 or the “brushed Metal” look of the Asus Zenfone 2 is probably up to your taste. 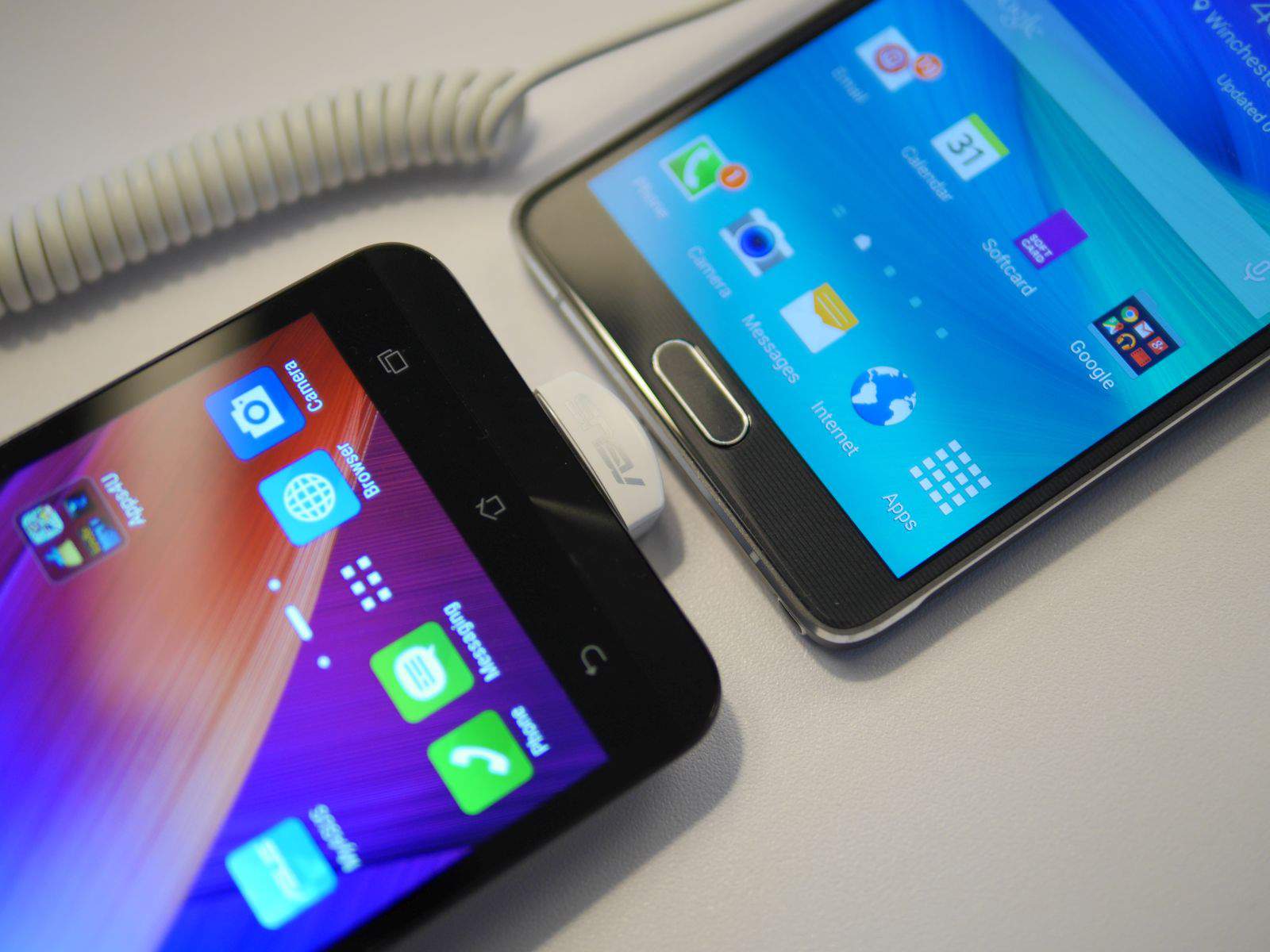 The Asus Zenfone 2 sports a 5.5″ inch Display with a Full HD resolution of 1080×1920. The display is protected by Gorilla Glas 3 and you get very excellent 403ppi. 5.5″ is an ideal size for most people in 2015 especially at this price. To be fair, in the screen department the Galaxy Note 4 with its QUAD HD 2K AMOLED 5.7″ Screen tops the Asus Zenfone 2 though. In the screen department the Note 4 has easily one of the best screens on the market at the moment. For this price difference everybody should think twice though, if you really need a 2K resolution on a Mobile phone screen.
Processor and memory

Asus has a long standing tradition with Intel CPU’s in all their Zenfones. With the Asus Zenfone 2 they follow that tradition and use Intel’s new 64-Bit Atom Silicon CPU. The LTE capable Intel Atom Z3580 processor quad-core CPU can be clocked up to 2.3GHZ. The Intel Atom Z3580 can actually easily hold its own against Samsung’s Snapdragon 805 and Exynos 7 Octa Cpu’s in the Galaxy Note 4. Only in the Graphics Department Galaxy Note 4 might be slightly stronger. 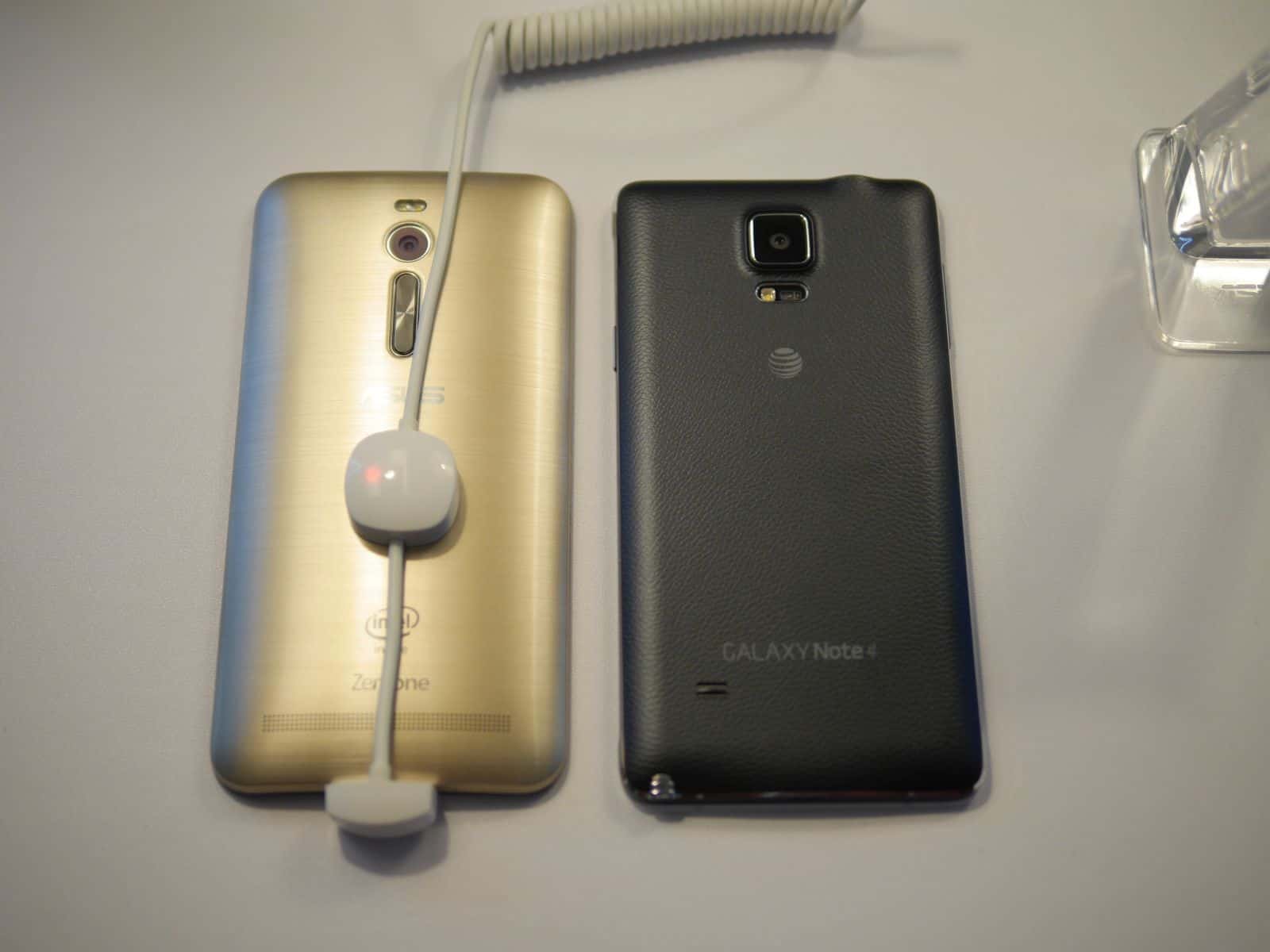 The Intel Atom in the Asus Zenfone 2 is very power saving as well and overall in the Performance department Asus gives Samsung really a run for their money.

Interface
The Asus Zenfone 2 is using Asus own OS the ZenUI on top Android Lollipop 5.0. You get a few new tricks and features in the ZenUI like ZenMotion and SnapView. Also you get Asus Instant Updates, which more then 15 Million Users of Asus devices use already. In general while ZenUI is not the most innovative UI, its definitely quite solid with Asus quality. 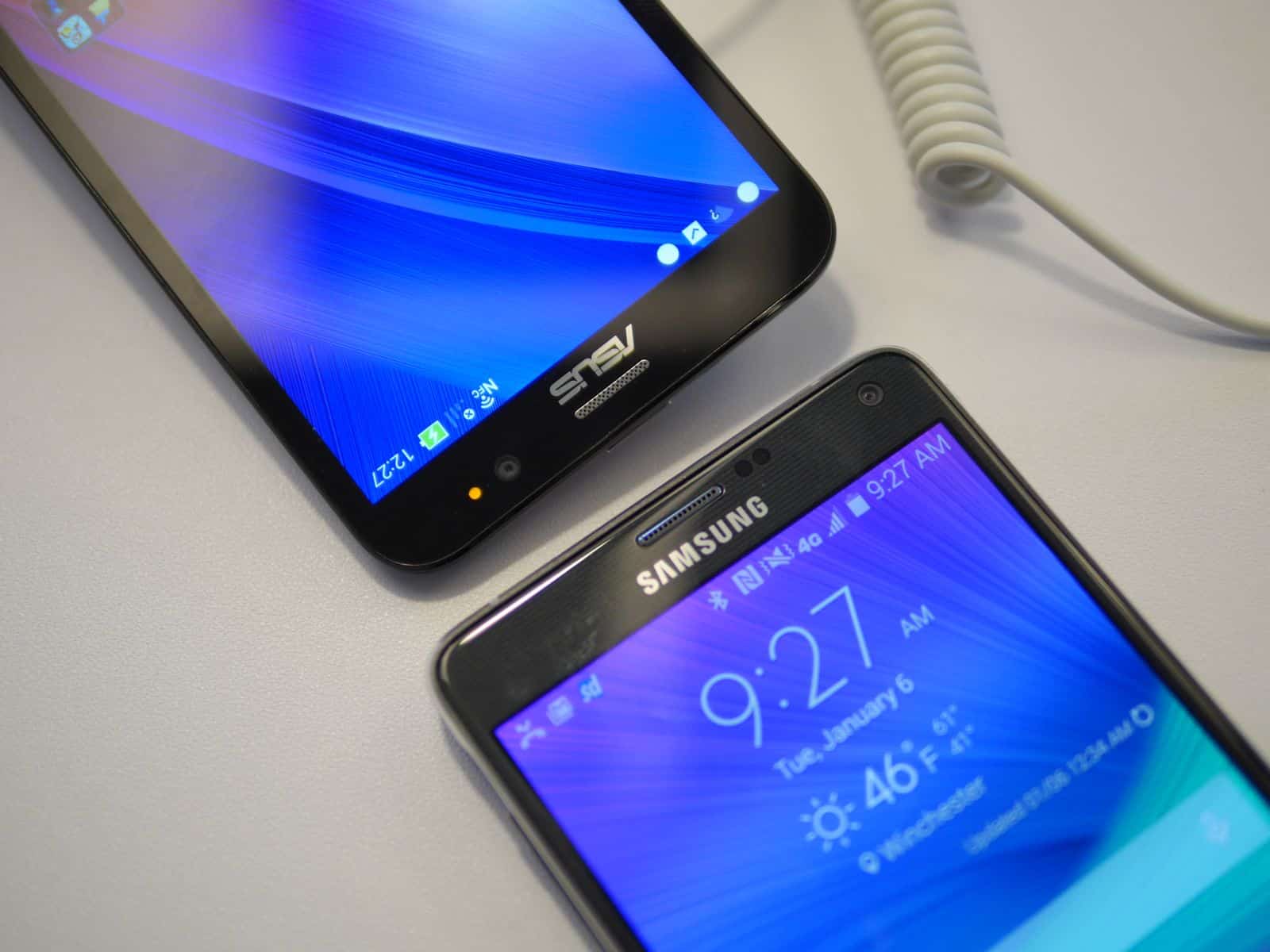 The Asus Zenfone 2 comes with a 13MP Camera sporting a 5-element f2.0 aperture lens. The Shooter also has DUAL LED FLash and you get a 5MP Selfie Shooter with 85 degree wide angle lense. The Galaxy Note 4 on the other hand sports a 16MP Main Shooter with OIS Optical Image Stabilization. On paper the Note 4 Camera should be superior.

You can have a look at these snapshots who compare Galaxy Note 4 and Asus Zenfone 2 Camera with the same objects. We are pleasantly surprised, especially on the low light pictures where we think the Pixel Master camera on the zenfone 2 even beats the Note 4. Asus claims that the Pixel Master lets 400% more light come in to their pictures and it seems in that respect. For sure you get high camera quality on both phones.

The battery life is always a crucial factor for a smartphone, even in times of very cheap PowerBanks. On paper the Galaxy Note 4 has a slightly larger battery capacity at 3220mAH versus the 3000mAH on the Asus Zenfone 2. The Galaxy Note 4 sports a very power hungry 2K Quad HD 5.7″ display. We need to wait for the first battery benchmarks to decide here. Both phones feature rapid charging technologies to charge your batteries quickly.

Lets be really clear here we are comparing a 200USD smartphone the Asus Zenfone 2 to a 700 USD flagship the Galaxy Note 4. The Asus Zenfone 2 cant beat the Galaxy Note 4 on Screen Technology, Camera with OIS and added functionality with the S-Pen. If those points are not super important for you, you might just go for the Asus Zenfone 2. For a third of the price you get a really awesome phone which performance can keep up in many aspects with the 3x times more expensive Note 4. I think many of you might just do that.