We are getting more and more familiar about Antutu Benchmark, which is a very useful app to consider when buying a smartphone. This time, Antutu reports revealed top 10 smartphones chips of H1 2016, according to their performance. 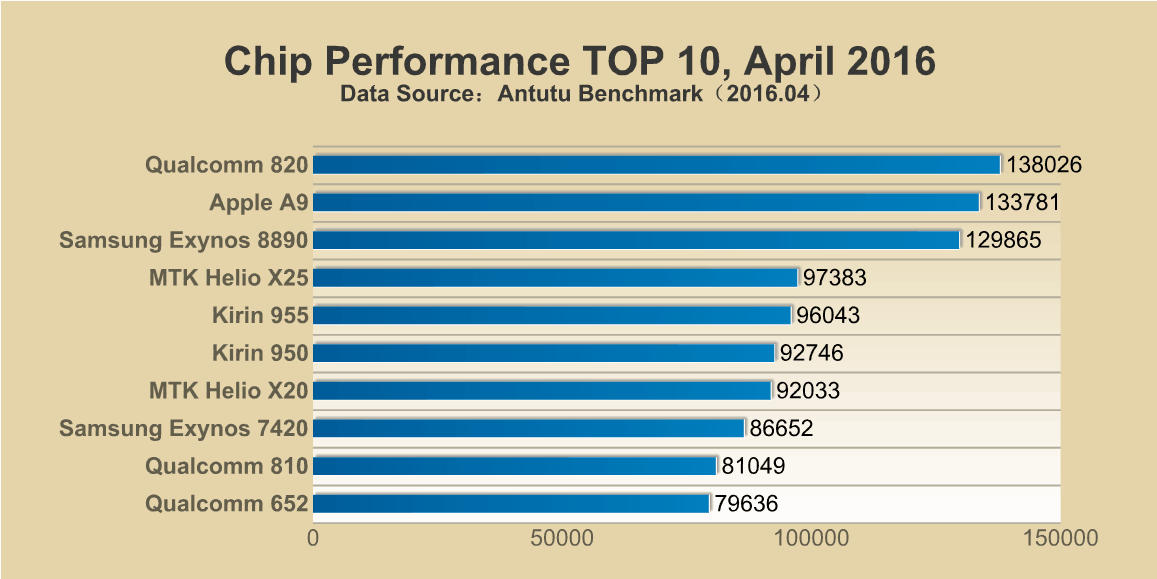 Antutu reports provide us with updated result of the most trendy devices in the market, including chipset. The most recent list revealing 10 of the strongest smartphone chips was announced in early Q2 2016. In the chart above, you can find very well known smartphone processors made by biggest producers in the world: from Snapdragon to Kirin, from Exynos to Helio. Antutu reports ranked the strength of these chips basing on a number of different tests, including single-core, multi-core and GPU performances. By doing this, the result makes sure to cover all aspects.

According to that, the most powerful chip for smartphones right now is, not surprisingly Snapdragon 820. This Qualcomm-made processor is being widely used in many premium mobiles of 2016, as well as loved by most users and tech geeks. The winner scored up to 138,026 points, far ahead of Apple A9 as runner-up with 133,781. Exynos 8890 is doing Samsung proud for ranking 3rd in the list, scoring almost 130,000 points.

Besides this performance chart, newest Antutu reports also announced the most widely used processors among smartphones nowadays, recorded by June 2016. Snapdragon 820 also tops this second chart, accounting for up to 9.66% market share. Meanwhile, runner-up Exynos 8890 is not that popular as the chip doesn’t even make it to top 10. Instead, ranking 2nd in this chart is Exynos 7420, also another sibling from Samsung.

Thanks to latest Antutu reports, we are confirmed that the current everyone’s favourite – Qualcomm Snapdragon 820 chipset – is worth its reputation. It is being both the strongest and the most commonly chosen. If you are looking to buy a high-end mobile device anytime this year, you know exactly which processor your future handset should be running over.