I believe by now, many of us Mi lovers are waiting for the next sign of upcoming Xiaomi Mi5 to be launched. And yet, on some online resources, users spotted and alleged image, claimed to be of Xiaomi Redmi Note 2 Pro 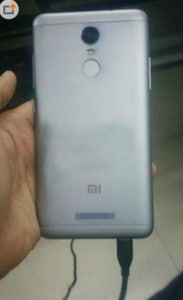 Xiaomi Redmi Note 2 Pro will have a decent 3060 mAH battery to help run the device for a good time. One more special thing about the Pro version is that it will have Android 6.0 Marshmallow pre-installed.

In terms of Xiaomi Redmi Note 2 Pro design, the handset will be carrying a fingerprint scanner and full metal body. Seems like metal build and fingerprint scanner are the next popular specs future smartphone are going to sell on. (Recently introduced, we have Meizu Blue Charm metal also comes with these 2  features). Does metal body really matter that much? Many say the alloy makes the whole device look much classy and premium but what is your opinion?

For now, we don’t know yet about Xiaomi Redmi Note 2 Pro release date or price in Malaysia. But as what we observe, it could carry a slightly higher price tag than its predecessor.

Do you think with kind of similar specs to the older model, and only a few new features, it is worth the update?  Share with us i fyou are using the Redmi Note 2 and whether you would want this Note 2 Pro 🙂