Last weekend, Xiaomi, on their Facebook fan page, revealed that they are launching the Redmi Note 2 Prime in India soon. The phone comes with some cool features that could make a great choice for its affordable price tag

Introduced earlier in August 2015, the Redmi Note 2 Prime is the successor of Note 4G and Redmi Note 2 – both of which are very popular and successful Xiaomi smartphones. This latest Xiaomi phone, heading out of China almost 4 months after debut, will be an affordable 4G LTE smartphone that target a wide range of potential users. Xiaomi Redmi Note 2 Prime price, for the 4G version, is estimated to be around USD 140 – USD 160, making it a direct competitor to Lenovo A6000 Plus, Coolpad Note 3 and Meizu M2 Note.
In terms of Redmi Note 2 Prime specs, we have a 5.5 inch FHD display with 401 PPI. What’s special is that, this display comes with the ability to lower light by 10x to make it friendly to human eyes during night time reading. The machine is powered by 2GB RAM and 32GB internal storage (but non expandable), the monstrous Helio X10 chip set by Mediatek and an octa-core processor. Redmi Note 2 Prmie cameras feature the 13MP/5MP duo and we will have a decent 3060 mAH battery. 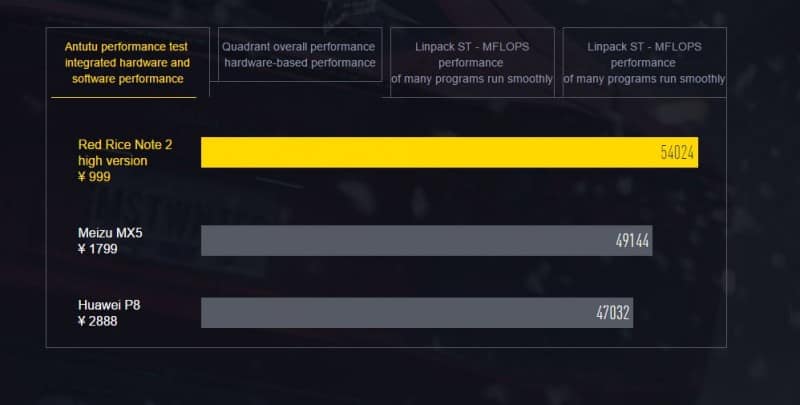 Also, Xiaomi have announced the Antutu Benchmark results of their latest smartphone. The Redmi Note 2 Prime processor scored up to 54,000 points on the trusted Chinese Benchmark, which is really impressive for a smartphone in the price group of USD 150. To give you a better comparison, the Meizu MX5 only scored 49,000 points and Mate by Huawei scored 47,000 points.

With 2GB RAM, octa-core and Helio X10 chip set working together, the Redmi Note 2 Prime is really a powerful device for its USD 150 price group. With 4G LTE competence, it is making the handset more appealing to users than ever.
Next Article
Prev Article