It seems more and more smartphone manufacturers have been paying much attention to the sub $100 (RM440) range. Therefore, we are witnessing many launches of such devices these days, including UMI ROME.

UMI is a Chinese smartphone maker and has been attracting a lot of people recently due to their budget but strong and beautiful products. Lately, the company has introduced a smartphone called Rome. Impressively, it looks very similar to the latest flagship of Samsung – Samsung Galaxy Note 5, premium and glossy. The back cover is likely to be made of metal and the color is so sweet. Moreover, the specs are good enough.

Specifically, UMI Rome specs include a MediaTek MT6753 octa-core 1.3GHz chip and 3GB of RAM. Besides, the machine is equipped with a 5.5-inch HD display, a 2,500mAh battery, Android 5.1 Lollipop OS, and 16GB of internal storage. As for the camera, there are a 13MP rear cam with Sony IMX164 sensor and a dual LED flash, and a 2MP front one with a LED flash. So, we really like the 3GB RAM, the octa-core chip and the 13MP Sony snapper. However, some other features are not the top ones, to be honest. 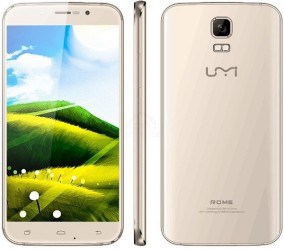 But, you know what, you will be satisfied with this smartphone once knowing UMI Rome price by continuing reading the next part! As we mentioned, it is going to be under $100, which can help UMI Rome beat a lot of competitors such as Cubot X15 and Ulefone Paris. Well, are you excited and ready to take a UMI Rome home?

In fact, there are handsets out there coming with similar packages of features, but they are usually priced at around $200 (RM880). Meanwhile, the Rome will just cost you $89 (RM390). We would like to give you a big WOW, UMI Rome! Nonetheless, you have to wait a bit more to purchase one Rome for yourself since the company is preparing everything. Probably we can see it before Xmas.