Not long ago, we saw Canon introduce their a prototype ultra-high sensitivity 35mm full-frame CMOS sensor at Canon EXPO Paris 2015. And it was able to amaze people with what it could capture when taken into the “Blue Milky Way” of Waitomo glowworm caves in New Zealand. Anyway, it is not our star today. In this post, we want you to know the Canon’s rival: Sony Starvis. 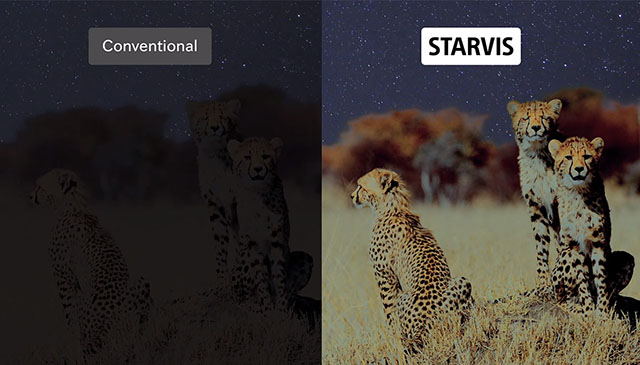 Lately, Sony has launched a new image sensor called STARVIS, excelling in taking photos in low-light condition. Unfortunately, this is not designed for smartphones but industrial applications like a observation camera. Accordingly, the new CMOS sensor can feature extremely high sensitivity to capture images at night that are quality enough to use.

Sony Starvis is able to increase night vision thanks to Sony’s extension of the sensor’s sensitivity beyond the visible light range into the near-infrared range. So, to make you see the real strength of SONY STARVIS, let’s have a look at the following video, and you know we are not kidding 😉 :

“It features a sensitivity of 2000 mV or more per 1 µm2, and realizes high picture quality in the visible-light and near infrared light regions,” said Sony.

In recent years Sony sensors have been gaining a lot of good feedback for their capabilities of taking pictures in low light environments. Furthermore, we can easily realize that consumers seem to prefer machines having cameras equipped with Sony sensors more than others, especially in smartphone area. So, with STARVIS, Sony’s history continues and develops more. And we guess that if any company or store could have a security cam containing this sensor, burglars would not dare to come 😀 .

In conclusion, Sony Starvis actually has come less than two months after Canon ME20F-SH, capable of shooting at ISO 4,560,000. But, who will win the race of super high sensitivity sensor?