Samsung is enjoying much success with the recent release of its newest flagship duo, the Galaxy S8, and S8+. However, there are other segments Samsung focuses on as well. Recently, the Korean company has just launched Samsung Z4, a phone with its own OS Tizen!

Samsung is a phone brand that is in almost every segment of the smartphone market. Recently, it has released the flagship duo S8 and S8+. For the mid-range segment, there will be the J series, while the A series will be slightly above that. The Korean company also focuses on the low-end segment as well and recently has launched the new Samsung Z4, a phone which runs Tizen OS, the operating system that is made in-house by Samsung.

The Tizen OS is Samsung’s in-house operating system, with goals to eventually not rely on Android anymore. The company hopes to achieve a closed ecosystem between its devices, similar to Apple. Tizen has also been on some smart TVs and smartwatches from Samsung. As for the phone, it caters towards the low-end segment and targets at emerging markets. This phone will fit with people looking for a simple smartphone with a fast connection. 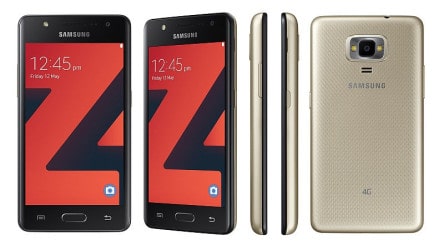 Samsung Z4 specs, in turn, is not that impressive performance-wise, but it is enough for daily use. There is a quad-core processor highly likely to be an Exynos chipset, accompanied by only 1GB of RAM. Its battery capacity is 2050mAh. Even though this will be a very cheap phone, it will have a slightly curved 2.5D glass screen, with size 4.5″ and WVGA resolution. It will also have a 5MP f/2.2 front camera and a 5MP rear camera with LED flash. It will be available in three colors: black, silver and gold. It will also have fast LTE connection!

Samsung Z4: Another option for the low-end segment!

Samsung Z4 may not offer the best performance, but if you want a smartphone with quick connection for a low price, this may be a good choice. Samsung Z4 price is expected to be below $100 (~RM. 431). What do you think of the phone?