This year, we welcome “Avengers: Age of Ultron” – one of the fantastic Super Hero movies of all time. Fans of this movie will probably be even more excited by the recent announcement made by Lee Young-hee, Samsung’s head of marketing mobile division, that they are planning to get their Samsung Galaxy S6 and Galaxy S6 edge new Avengers outfits.

As we know, there are many interesting characters in Avengers like Thor, Black Widow, Hulk, etc., but the first Samsung Galaxy S6 Avengers to be released at the end of May or the beginning of June will be Iron Man version with red color. 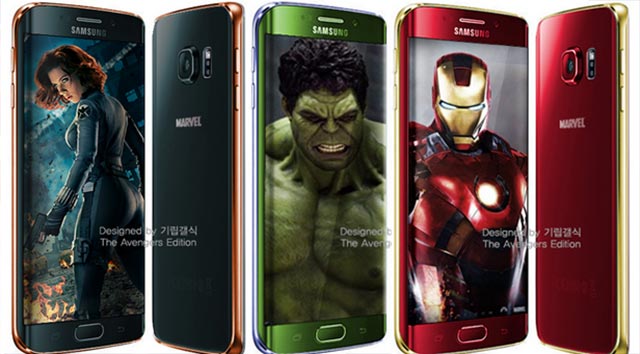 This news is like a response to the rumor that Samsung is considering releasing Samsung Galaxy S6 Avengers versions with many color options representing all the characters, which means the consumers can choose their favorite one. However, the manufacturer has not made their final decision yet, so we should look forward to that after the Samsung S6 Iron Man is on sale.

Although the news has been spread out, we have to wait for Samsung to officially unveil the Iron Man version of the Samsung Galaxy S6 Avengers. Meanwhile, let’s have a look at the fan renders of not only Iron Man Galaxy S6 edge but also other heroes in Avengers.