This year, Samsung is going to do something different from the previous years. As usual, a Samsung Galaxy Note phone is often introduced at IFA Berlin event for the first time. However, the new member of Note series in 2015 – Samsung Galaxy Note 5, will be released earlier, on 12 or 13 August.

Besides the Note phablet coming with an S-Pen, Samsung Galaxy S6 edge+ will also be presented as a bigger version of Galaxy S6. According to the latest news, both cool devices have been spotted in some photos, and this time, they are REAL phones in REAL pictures. 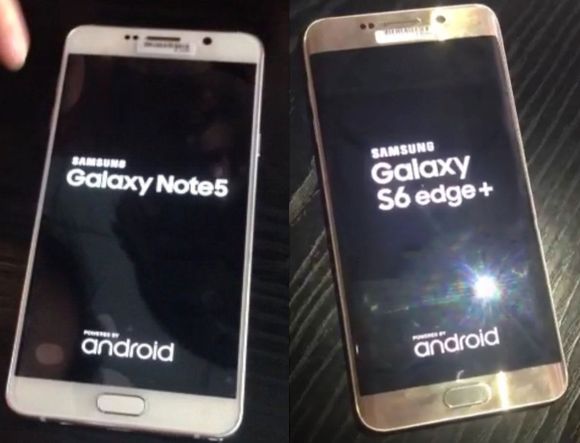 From these pictures, we notice that the white version of Galaxy Note 5 looks premium with metal and glass like the Galaxy S6. The front surface of Note 5 appears similar to that of Galaxy Note 4 but with super slim bezels. We estimate that the screen size can range from 5.7 to 6 inches. As for the home button, it is an oval physical button, like the S6’s one, and probable will come with a fingerprint sensor. Though we cannot tell anything about the Galaxy Note 5 specs for sure now, but its design somehow satisfy our curiosity after so many days looking at the renders only.

Unlike the Samsung Galaxy Note 5 which has been a mystery, the design of Galaxy S6 edge+ is not surprising much since from the name, we can see that it will look a lot like the current S6 edge. In fact, it is a bit wider and taller. We guess that Samsung Galaxy S6 edge Plus specs will also the same as the original S6 but there should be a larger battery to power such a screen.

In conclusion, we are heading to August to welcome two new products from Samsung: Galaxy Note 5 and S6 edge Plus. Hopefully there would be no delay and Samsung will release official information about their flagships soon!

More pictures of Samsung Galaxy Note 5 and S6 edge Plus: