Nextbit Robin, a totally new name in the mobile market, is planned to be released in 2016. However, it has just appeared in a project promoted on Kickstarter page, “the world’s largest funding platform for creative projects”. 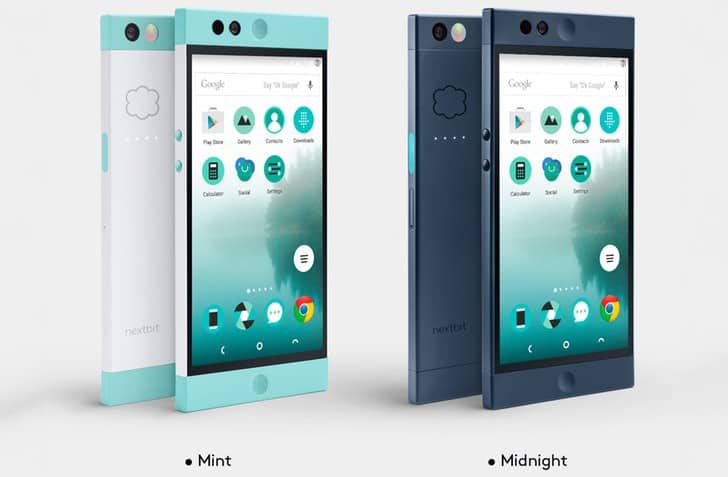 According to Nextbit, their product will be running on Android 6.0 Marshmallow OS paired with 32GB of non-expandable storage. Nextbit Robin also claims that everything on the machine will be backed up in the cloud, including multimedia, apps, and data. Interestingly, whenever it recognizes that you are no longer using any apps or photos, it will delete them all but you will always know that they are up in the cloud. However, one thing you should bear in mind is that the internet connection is necessary once you need to retrieve things you want. Besides, the Robin will come with 100GB of cloud space and won’t charge any money for additional space.

Apart from that outstanding feature, other Nextbit Robin specs are also worth considering. They include a 5.2-inch IPS Full HD screen, a Snapdragon 808 chip, 3GB RAM, USB Type-C port and fast charging function. As for the camera, the combo consists of a 13MP rear shooter with phase-detection AF and dual-tone flash and a 5MP front snapper. In addition, Bluetooth 4.0, NFC, Wi-Fi a / b / g / n / ac, 4G LTE support, a fingerprint scanner, front stereo speakers and a 2,680mAh battery are also available on the handset.

Well, looking at the pictures of this new smartphone, we have to say that the Nextbit Robin design is so lovely. Hopefully, the phone will soon arrive here in Malaysia!