The Moto Z Play was one of the best smartphones in the industry in terms of battery. With its success, Lenovo will surely look to release the next version of the phone. Now, the Moto Z2 Play has been revealed! 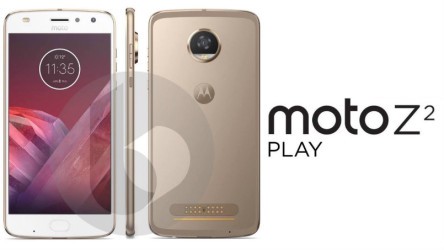 The previous phone in the Z series, Moto Z Play, was rated very highly for its battery. With 3510mAh capacity, it can last a whole day and a half of usage with no problems at all. It was received so well, that Lenovo will surely want to capitalize on that with the next iteration of the phone. Now, we have some Moto Z2 Play specs revealed, and surprisingly, the battery got a decrease! Many speculate it due to the phone having a thinner design, so some sacrifices were made.

It seems that Lenovo wants to reduce a little bit of bulk on the Z Play, to achieve a thinner body, much like the original Moto Z. To do that, the battery capacity will be reduced, from previously 3510mAh to only 3000mAh now. With this change, it will definitely not be able to last as long as Z Play. The Moto Z Play was able to last up to 50 hours, and now the Moto Z2 Play can only stay for up to 30 hours, which will be kind of unimpressive for many people.

However, the Moto Z2 Play also receives upgrades in every other department. It is set to house a Snapdragon 626 chipset, clocked at 2.2GHz, with Adreno 506 GPU. Going along will be 4GB of RAM, and 64GB of storage. Other Moto Z2 Play specs will also include a 5.5 inch SuperAMOLED display, a 12MP f/1.7 camera lens at the rear, and a 5MP lens at the front for selfies. Similar to others from Z series, this phone will also be compatible with Moto Mods.

With those specs, Moto Z2 Play will be more powerful the the Z Play, but will last not as long. Moto Z2 Play price and release date has not been revealed yet, although reports suggested that it is quite close. What do you think of the new Moto Z2 Play?