Microsoft can save their sale by releasing Lumia 850 as it is so beautiful, even more than the flagship duo Microsoft Lumia 950 and 950XL announced in October, 2015. 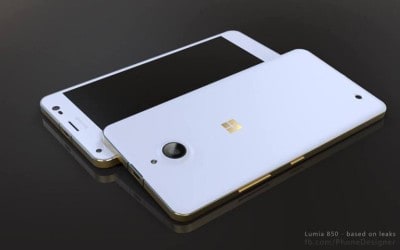 Lumia 850 – Slimmer and prettier than the flagship Lumia 950

If we compare the designs of Lumia 850 and Lumia 950, we have to say that the younger brother is prettier. Thanks to a gold metal frame (aka MOZO) and a slim body, the Lumia 850 looks absolutely premium and impressive. Lately, many pictures of this phone have been spread on the internet, which helps strengthen our claim a lot. As you can see, there are 2 basic color options Black and White, but they can attract viewers at very first sight.

From the beginning, it was the Twitter account @evleaks that revealed some leaked pics of Lumia 850 and then more of them came from the site Windows Phone. However, it is until now that things get much clearer about the Lumia 850 design through the photos posted on nokiapoweruser.com. Unfortunately, some people have assumed that it is Lumia 750XL with a big 5.7-inch screen. So, maybe we have to wait for Microsoft to confirm everything. 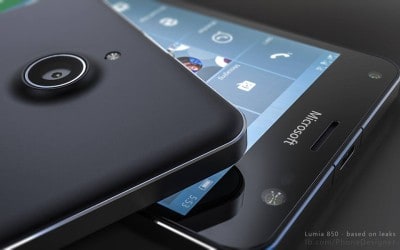 In terms of Lumia 850 specs, Lumia 850 coded as Honjo will probably pack a 5.7-inch Full HD display and a Qualcomm Snapdragon 617 processor, which makes it as HTC One A9. Apart from them, there has been no word made for other specifications. We will update in the next posts.

As we mentioned, Lumia 850 is prettier and thinner than its elder brother Lumia 950 (6.92 mm (8.5 mm if including the camera bulge) vs 8.2 mm, respectively). Therefore, we predict that if Lumia 850 price is affordable enough (say, around $280), it can help improve the firm’s sale next year. Don’t you think?