After the flagship LG G4 launch, the Korean giant has not chosen LG G4 Pro or LG G5 to compete with other flagships on the market. Instead, it was a whole new smartphone called LG V10, said to be a “super premium” device for this H2 of 2015. When LG V10 launch happened, we could realize that V10 was a promising and ambitious phone when sporting many top specs and a gorgeous design. To know it more clearly, let’s have a look at LG V10 in real life when someone unboxed it! 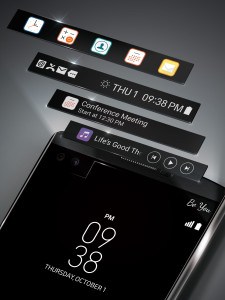 So, the version in this case is an LG V10 Luxe White, also coming in a rectangular white box featuring V10 logo in the front surface. If you think the packing is kind of boring, perhaps the LG V10 handset can change your mind. It looks pretty big due to its 5.7-inch Quad HD main and 2.1-inch secondary display on the front, but impressive! By the way, we want to add more information about the smaller screen’s functions. Accroding to LG, it is to pop up notifications, show some useful app shortcuts, offer music controls, and display calendar events as well as your personal message.

Besides, the plastic cover feels normal though it is treated with Dura Skin (a kind of material which is soft to touch yet resistant to cut or scratch at the same time). On the rear, there are a volume and a power key (with fingerprint sensor built in).

To power the whole machine, Qualcomm Snapdragon 808 SoC chip is put in charge. And will not let you wait for so long. Here are the table of LG V10 specs for you full view and its unboxing pictures. Enjoy 😉 !

In conclusion, we can say that this is a beautiful smartphone with new interesting features that we cannot find in other handset. However, though the price is somehow reasonable for what it has, it is still too much for many consumers to afford.