HTC 10 is the official name, leaked in new images

Well, things have changed. We won’t have the HTC One M10 as we expected. But, don’t worry. We’ll get an HTC 10 with an elegant design and… 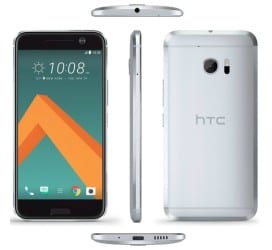 HTC 10: Name got confirmed; design and specs showed up

With what we’ve just got, it seems like HTC has decided to discontinue their flagship series HTC One like what Sony did with their Sony Xperia Z. The HTC ‘s first flagship this year will be named HTC 10, not HTC One M10 as we thought. On the other hand, some think that this can be a new line-up of the manufacturer. Anyway, it’s just a change in the way we call the handset. Recently, two well-known leaksters have shown some photos of the device, including its full press renders and live images.

Along with them, the account @onleaks also revealed some “prototype specs” for the HTC 10. Specifically, it will pack 5.15-inch Quad HD screen, a Snapdragon 820 chipset, 4GB of RAM, and a USB Type-C port. As for camera, the rear one will be capable of 12 megapixels with UltraPixel tech said to be similar to the one Samsung equips their Galaxy S7 and S7 edge with. For other HTC 10 specs, no word has been made yet!

Until now, the company has already released an teaser image and a teaser video for the HTC 10 and we spotted the above leaked renders and pics. As a result, we guess a full list of the 10’s features will be unveiled soon. Let’s wait and see!

So, now we understand what the #power10 means. Though, we still want an official announcement from HTC to confirm whether the 10 is a replacement of the One M10 or it’s a brand new machine. However, although the moniker changed, ‘we’re pretty sure April 11, 2016 will still be the HTC 10 launch date, and in terms of price, it can cost around $700.