Samsung has just officially announced Galaxy A9 – the latest smartphone in their A series, in a current event in China. The smartphone sports a slim 7,4mm body and very decent battery capacity…. 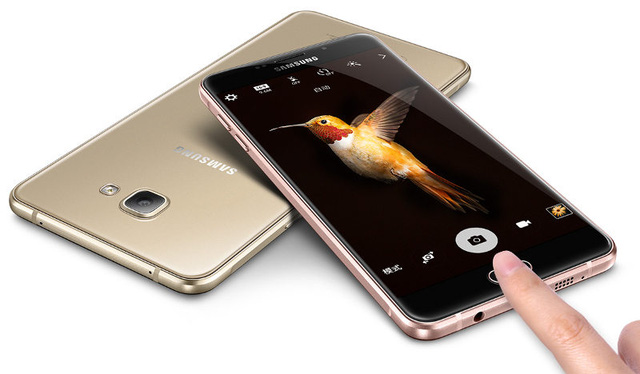 Though we have known about the Galaxy A9 for a while now through different rumors and leaks, the release of it has confirmed to us official Samsung Galaxy A9 specs. According to that, this is the very first Samsung smartphone to feature such a huge display: 6 inch – to help maximize user’s experience when using the phone. The Galaxy A9 display resolution is 1920 x 1080 pixel, making sure to display the best image quality for your eye treat.

Though earlier rumor did hint that the Galaxy A9 would run on premium Snapdragon 620, the handset actually features a Snapdragon 652 chip set together with 3GB RAM and 32GB internal storage. Samsung Galaxy A9 cameras sport a 13MP anti-vibration sensor on the back and a 8MP sensor on the front. However, the key selling Galaxy A9 feature is its battery – which is as big as 4000 mAH capacity coming together with QuickCharge.

On release date, Samsung Galaxy A9 is pre-installed with Android 5.1 and comes in 3 color options: rose gold, gold and white. (yes, no black). Samsung will start mass selling of their latest smartphone in January, first in Chinese market. Much curious as we are, we did not know any further about the Galaxy A9 price and plan for other markets yet.

Together with a decent battery and nice camera shooters, Samsung also feature latest technology for this phablet, including fingerprint sensors, Samsung Pay, NFC, Wifi and Bluetooth. How much do you expect the Galaxy A9 price to be? Since some of our sources are suggesting that, Samsung plan to keep their product prices as reasonable as possible, we expect the Galaxy A9 price won’t go beyond USD 400 in international markets.