Both phones have fast battery charging for their non-removable 3000mAh batteries. Specifically, Honor 8 allows the user to have 47% battery in 30 minutes of charging. In terms of screen display, both phones have a resolution of 1080 x 1920 pixels. However, Honor 8 screen has higher pixel density of ~423ppi with it’s smaller 5.2-inch screen, while Moto G4 Plus screen is at 5.5-inch with only ~401ppi but with protective Corning Gorilla Glass 3. So Honor 8 can display better, but Moto G4 Plus has the more durable screen. 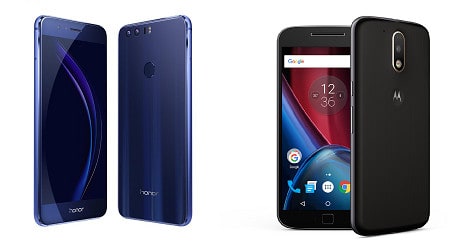 Both have fingerprints sensors, although Honor 8 sensor is uniquely placed at the upper back while Moto G4 Plus sensor is placed at the phone’s Home button. In terms of camera features, both phones offer many similar features such as touch-focus and face-detections, but they differ greatly in terms of camera qualities. Moto G4 Plus has a main camera of 16MP  (f/2.0), can shoot 1080p videos at 30fps, as well as a front-facing 5 MP camera (f/2.2) auto-HDR. On the other hand, Honor 8 offers a dual primary 12 MP (f/2.2) cameras, able to 1080p videos at 120fps, and a frontal 8 MP camera (f/2.4)! Honor 8 wins in terms of photography.

Huawei Honor 8 vs Motorola Moto G4 Plus: elegance vs affordability

In Malaysia, Huawei Honor 8 price is at RM 1699 (418USD) and it comes in four different color options (black, white, navy blue and gold), while Motorola Moto G4 Plus price is much cheaper at RM 1159 (285USD) and comes in two versions (black and white). This depends on each user’s preference, but it is undeniable that Huawei Honor 8 has more notable camera and specs, striking battery charging feature, as well as more polished exterior design with slimmer and lighter phone frame. Understandably, the features of Huawei’s smartphone are reflected in the price; however, it would be a good investment. Let us know what you think about this verdict!