There was a Xiaomi phone codenamed Xiaomi Arch spotted on the internet. Many people think that it can be the nickname they call Xiaomi Mi5 internally, like Microsoft calls Lumia 950 Talkman and Lumia 950XL Cityman months ago. But now, a source has hinted that that special phone can be Xiaomi Mi edge. Moreover, it can become a potential competitor to the well-known Samsung Galaxy S6 edge. 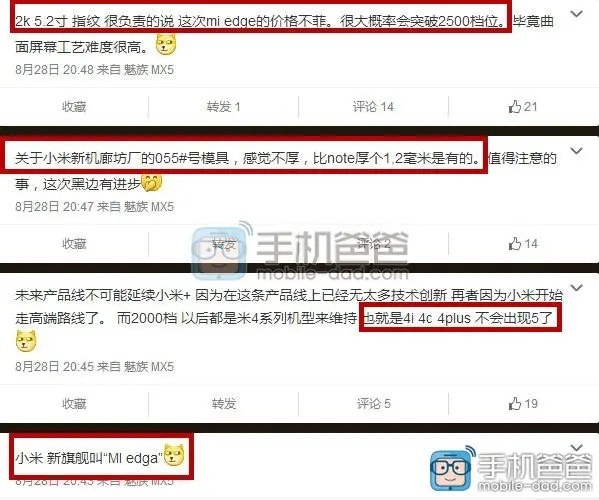 If we remember, Xiaomi has Xiaomi Mi Note as a beautiful device with curved glass for the rear panel. Perhaps, they have thought carefully and come up with the idea of a product sporting a curved front panel. That somehow explains for many rumors about Xiaomi Mi edge spreading on the internet these days. Furthermore, we even see some suggesting Xiaomi Mi edge specs.

According to Weibo tipsters, Xiaomi Mi edge will probably feature a 5.2-inch 2K screen provided by Sharp, a Snapdragon 808 processor, a fingerprint scanner, a 16MP main camera and 3 or 4GB RAM. It seems that Xiaomi will choose the top specs for this special machine.

In terms Xiaomi Mi edge price, though Xiaomi is known for producing smartphones with good specs and affordable prices, it is believed that the Mi edge will cost more than other Mi handsets, at least 2,500 Yuan (RM1,632). Then, what is your thinking about that price?

In conclusion, Xiaomi may be finding something new and creative for their machines. But, can a curved one succeed in bringing the company more money and fame? If the Mi edge is really coming, it definitely cannot avoid a comparison with the Samsung Galaxy S6 edge. Let’s wait and see!