Samsung Galaxy S7 launch is going to occur soon. Check out its official specifications and benchmark score and you’ll be amazed! 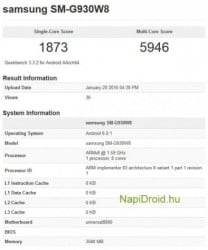 Samsung Galaxy S7 specs and design to be confirmed

According to a reliable news source, our most anticipated flagship Samsung Galaxy S7 will only come in “edge” form, which means perhaps we will no longer be able to see a beautiful flat Galaxy S7 this year. Though, we bet it has to be extremely gorgeous to make the company decide like that. Specifically, it is said that Samsung Galaxy S7 screen will measure 5.1 inches and the whole machine will look similar to Samsung Galaxy Note 5 with curved back sides.

However, please note that it is the original S7 with curved back. There will still be a 5.5-inch Samsung Galaxy S7 edge with curved edges on the front and also a 5.7-inch Samsung Galaxy S7 edge Plus. As for the S7’s hardware, it has already been confirmed to sport a Qualcomm Snapdragon 820 chipset. Other specs are likely to contain a 5MP front shooter, 4GB of RAM, 64GB of internal storage (expandable), Adreno 530 GPU and of course Android 6.0 Marshmallow OS.

In terms of camera, Samsung seems to be focusing on improving the handset’s ability to take pics in low-light conditions, so they will probably downgrade to 12MP rear camera with help of the new BRITECELL setup. Overall, we are not very surprised when hearing that the next Samsung’s flagship will own a lot of advanced as well top features and technologies.

Lately, a device coded as SM-G930W8 and considered as the Galaxy S7 has appeared on Geekbench with 1,873 points for Single-core test and 5,946 for the Multi-core one, much higher than Samsung Galaxy S6‘s 1,242 and 4,227, respectively. This makes us feel even more excited and really look forward to the Samsung Galaxy S7 release date. How about you?