Recently, we have spotted two Samsung smartphones that made us drop our jaws due to their beauty. Let’s check out Samsung Galaxy A5 and Galaxy A7, whose designs are likely to be inspired by Samsung Galaxy S6 design. They can be the first Samsung products to open 2016 for the company…

According to Anzhuo.cn, which is also the page that posted many pictures of Samsung Galaxy A5 and Galaxy A7, they are probably the second generations (or 2016 versions) of the original Galaxy A5 and A7 released in October, 2014 and January, 2015, respectively. However, we are not sure that the new phones would inherit their predecessors’ designs. Actually, they look like Samsung Galaxy S6 in terms of frame, home button and rear camera.

Looking at the pics, obviously the phones’ backs are made of not the same materials. While Galaxy A5 goes with a metal rear cover, Galaxy A7 chooses glass for its back. Apart from that, they both have similar big home physical buttons on the front surfaces and maybe fingerprint sensors are built in as well.

Previously, GFXBench once revealed the devices’ specifications. Accordingly, the A5 is coded as SM-A510 and said to be equipped with a 5.2-inch Full HD display and a 1.6GHz octa-core Exynos 7 SoC chip paired with Mali-T720 GPU. Other Samsung Galaxy A5 specs will probably include 2GB of RAM, 16GB ROM (expandable) and a set of a 13MP rear plus a 5MP front camera. The whole handset will run on Android 5.1.1 Lollipop OS (we wonder why it is not the latest Android 6.0 Marshmallow one).

As for the Samsung Galaxy A7 specs, there will be a quite different package of features. It is coded as SM-A710, purportedly coming with a 5.5-inch Full HD SAMOLED screen, a 1.5GHz Snapdragon 615 SoC chipset, Adreno 405 GPU, Android 5.1.1 Lollipop OS, 3GB of RAM, and 16GB ROM (expandable). Also, the camera combo can consist of a 13MP main and a 5MP secondary snapper. 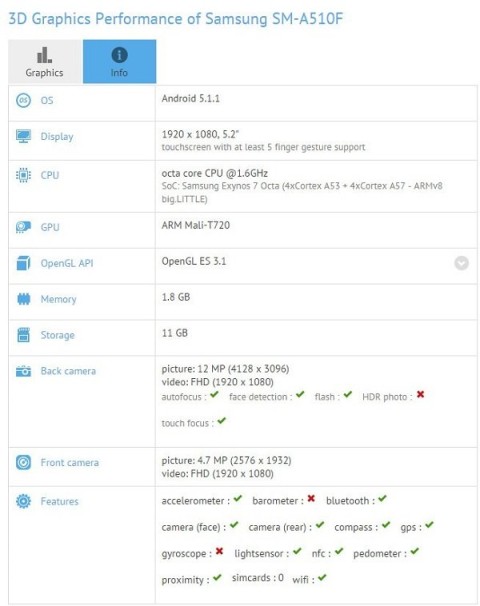 Samsung Galaxy A5 and Galaxy A7 price and availability

Specs are spotted on GFXBench and live pictures are seen on the internet? We can say that they are on the way. Though, Samsung has not made any official announcements yet, but the Q1 of 2016 seems a good time. Don’t you think? And for a mid-range smartphone, we hope it will cost around RM900 and the more premium one will be around RM1,200.