Ideas for mobile concept will never be depleted because everybody loves to see how far these ideas can go. One newest mobile concept for future Nokia smartphones has been unveiled and made us feel excited, the Nokia Power Ranger concept.

After the acquisition of Nokia and Alcatel on April 15, we are hoping to see the next generation of smartphone from Nokia, which used to be the biggest phone manufacturer in the world. On the main site of Nokia, the company emphasizes: “The combined company will be uniquely positioned to create the foundation of seamless connectivity for people and things wherever they are. “.

Mobile phone concepts vary from realistic ideas to utopian ones. This concept for next Nokia smartphone, which belongs to Ashraf Amer, is called Nokia Power Ranger. Here we give you some images and futuristic specs that may come out of the Nokia next smartphone’s box. 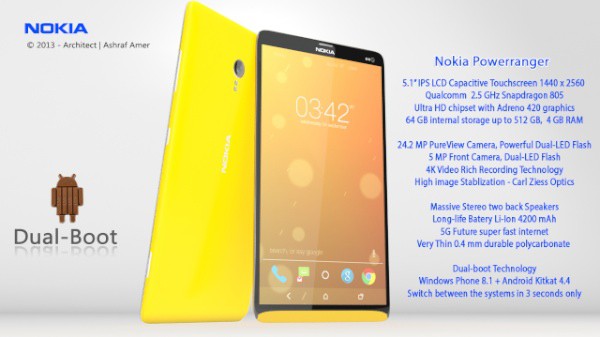 Nokia Power Ranger boosts both Window Phone 8.1 and Android 4.4 operating system. Powering the phone is a Snapdragon 805 processor clocked at 2.5 GHz, an Adreno 420 takes care of graphic. A 5.1” 2K (2560×1440 pixels) display accounts for nearly all the front of the device.

Furthermore, upcoming smartphone alo offers powerful 4GB RAM and up to 512GB internal storage (what a shocking figure). If the real internal storage really is of 512GB, we certainly don’t need a memory card slot anymore. With enormous imagination, the designer gives the handset a camera with a resolution of 24.2 MP, while the front camera is just of 5MP (!!).

Unlike previous smartphones produced by Nokia, the Nokia Power Ranger concept is designed with a polycarbonate and super thin bezels built.