It’s been a long time since Nokia hinted their comeback. And now, with the brand-new information of Nokia Lumia Black, it seems like their return is getting closer than ever. Take a look at this device! 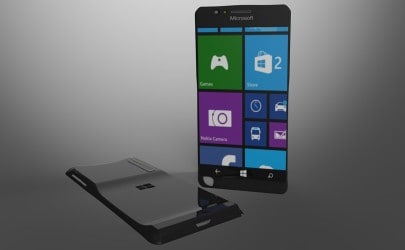 Recently, photos of Nokia Lumia Black have been leaked on the internet, along with some of its specs. As you can see in the photos, this brand-new device is designed in a totally different shape from other smartphones in the market. The mid portion of Nokia Lumia Black is concave, which can prevent the phone from slipping off your hand. Just like other Lumia siblings, this phone comes with curved edges. On the back of the phone lies the Windows 10 Mobile icon.

On the front, Nokia Lumia Black looks similar to other Lumia devices: inducing buttons at the bottom, front camera, light sensor, speaker and the logo on the top. The screen-body ratio seems quite bigger compared to the old siblings of Nokia, as the screen is expanded towards the two sides of the phone. Another thing that makes this design unique is its profile angle. With the sagging on the back, this phone looks like a futuristic remote control. As for Nokia Lumia Black specs, there is only a little information revealed. There will be a 20MP camera on the back and a 8MP selfie snapper on the front, both featuring Pureview technology. Besides, Lumia Black may also come with a 5.0-inch full HD screen display with the pixel density of 401ppi. The phone is also expected to run the latest version of Windows: Windows 10. Look at the pictures, you may noticed that there’s no dramatic changes in the way they arrange the living tiles. As for the performance, Nokia Lumia Black is reported to pack 4GB of RAM – the biggest RAM to be featured in Lumia lineup.

According to the source, Nokia will make a comeback at the end of this year, and Lumia Black could possibly the first product to be launched after the long break. Nokia Lumia Black release date is expected to be after the return of Nokia. If so, the wait is almost over! Also as reported, Nokia Lumia Black price will be no higher than $350.