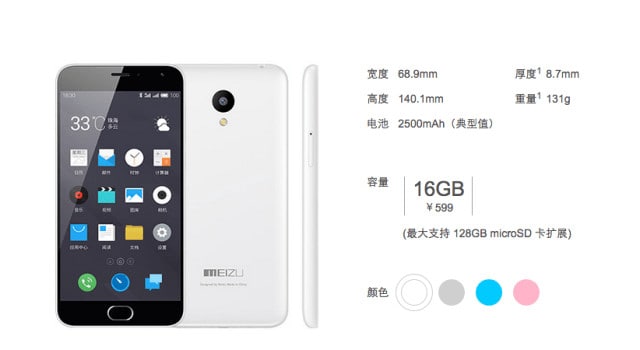 Unlike its predecessor Meizu M1, Meizu M2 has a longer body and a physical home button. Moreover, there is one more color variant: Grey. Those who like bright and colorful phone can still choose a blue, pink or white M2 while those who like a simpler one can choose grey.

In terms of specs, Meizu M2 has many better features compared to other phones at the same price:

At the launch, Meizu M2 price is set at 559 Yuan. This means Meizu M2 price in Malaysia is only RM343. This makes it become another perfect choice in the sub RM500 list. However, Meizu has not announced anything about its availability in the international markets.

Well, in the end, we would like to welcome Meizu M2 to join the budget smartphone world. Hope that Meizu M2 can be a good friend of yours!