Up to now, we still have no idea about how the upcoming Xperia Z5+ will look like. However, from an screen capped taken from an unfinished presentation of the company’s upcoming phablet, we can partly have a clear image about Sony Xperia Z5+ classical style.

As you can see below is the image of Xperia Z5+. Especially, in term of the Xperia Z5+ Specs, the device will come with the 5.5-inch display, or maybe larger, together with the 4K resolutions of 3,840 x 2,160 pixel.

Previously, there are many rumors around the preparation of the Sony flagships that Sony is planning to make a successor, possibly an entire new Xperia Z5 range. The latest rumor also hints that  the company’s “4K X-Reality” technology could be applied for some of these smartphones. 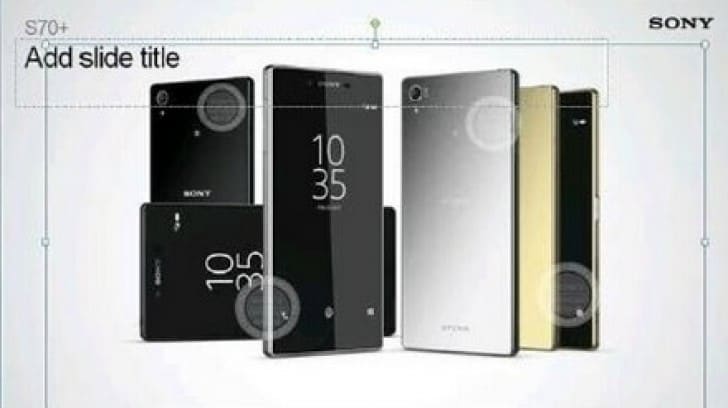 The device will have 3GB of RAM and 32GB of internal storage. For taking pictures, there will be a 20.7-megapixel main camera, along with 8-megapixel front camere. The battery will come with 4,500mAh capacity.

Moreover, the given pictures also showed that the upcoming smartphone will be available in three color options which are black, white as well as gold. In addition, it seems to be extra option for Chrome.

At the edge side of the Sony Xperia will be equipped the fingerprint sensor. Sony is going to boot the two version of the Xperia Z5 and Xperia 5+ at IFA, even though knowing that Sony might reorganized to lauch and upgrade the devices few months afterwards. The current information of the Xperia 5 flagship that it will use the Snapdragon 810 chipset. However, it is not sure how much the upgrade will cost.

The Sony Xperia Z5+ price in Malaysia as well as the Xperia Z5+ release date hasn’t been announced yet. If you are interested in this Sony smartphone line. Stay tuned and we will update the newest info!