Huawei Mate 8 vs Samsung Galaxy A9!!! This will be a thrilling battle. One is a flagship smartphone and the other is many people’s favorite one. Check it out now! 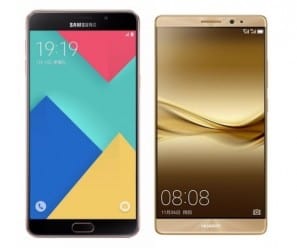 Huawei Mate 8 vs Galaxy A9: HOT powerful phablet battle ever

Firstly, about design, we see that each of them has its own beauty, so it would be kind of… lame, right?! But, we’ll tell what they’ve got in terms of appearance. Huawei Mate 8 has a metal unibody which brings a sturdier feeling when we hold it in hands. Besides, there is a fingerprint scanner placed on the back, which is also very convenient to unlock the phone. As for Samsung Galaxy A9, it owns a metal frame and glass on both front and back surface, making it looks absolutely premium. Unlike the Mate 8, the A9’s fingerprint sensor is built in its home button lying below the screen. So, which one do you prefer?

Next, let’s talk about their specifications. Almost all of Samsung products sport AMOLED displays, and the Galaxy A9 is not an exception. Samsung Galaxy A9 specs pack a big 6.0-inch Super AMOLED display with Full HD resolution. Meanwhile, Huawei Mate 8 specs contain a 6.0-inch Full HD screen as well but with LCD display. In general, they are pretty good. In addition, both machines boast awesome 8MP selfie shooters, huge 4,000mAh batteries with fast charging tech, 3GB RAM and 32GB ROM (expandable up to 128GB). For the Mate 8, it has a variant equipped with 64GB ROM and 4GB RAM, which is totally more powerful than the A9. 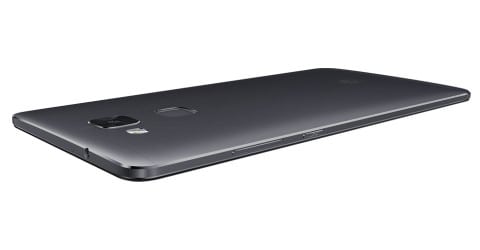 When it comes to other features, the difference will be clearer. The Mate 8 uses a HiSilicon Kirin 950 chipset paired with Mali-T880 MP4 GPU while the A9 is run by an older and slower Qualcomm Snapdragon 652 processor paired with Adreno 510 GPU. Additionally, the Huawei’s handset’s got a cool 16MP rear camera, yes, cooler than the A9’s 13MP one. In those aspects, we have to say Huawei Mate 8 is better than Samsung Galaxy A9.

Huawei Mate 8 vs Galaxy A9: Price and availability

At the moment, these smartphones are available. Samsung Galaxy A9 price is about $500 unlocked while Huawei Mate 8 price is about $580. Then, obviously the A9 has more advantages. Don’t you think? In the end, they are strong phablets on the market now. Tell us your winner of this great comparison!