Everdisplay – a display manufacturer in China has just introduced a 6-inch 4K AMOLED display with 734ppi pixel density. Currently, the highest pixel density on the mobile device is said to be the Samsung Galaxy S6 with 5.1-inch QHD AMOLED screen (reach up to 577ppi pixel density).

At the end of 2014, the Everdisplay manufacturer began mass producing 5-inch 720 AMOLED displays. Followed by, the company continue to brought out the 5.5-inch and 6-inch panels for mobile devices, along with 1.4-inch 400×400 circular AMOLED for the wearable market, and 8-inch AMOLED for the automobile market. 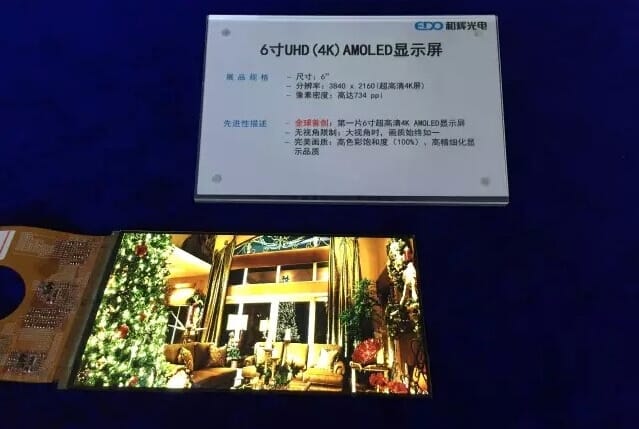 According to Everdisplay company, they have not intended to apply the new 4K resolution display for smartphones, instead of that the company will focus on virtual reality devices (VR).

The company shared that the distance from our eyes to VR displays  is  much closer than to the screen of smartphone. For this reason, VR need higher screen resolution.

Up to now, Everdisplay still has not revealed the specific time to bring the AMOLED 4K panel into production. However, the Everdisplay’s 4K screen (734ppi) is still not a most impressive panel to be introduced. In this early year, Sharp has launched an IGZO with 4K resolution and pixel density up to 806ppi.

Samsung even claimed to be ready for producing a 11K display, one of their coming products will have up to 2250ppi pixel density. This is such an incredible figure at the present moment.

There is one thing for sure that many smartphone users are looking forward to one day, we will be holding the phone with a 4K high resolution display or even more!